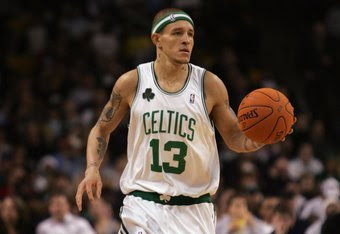 As a retired police lieutenant, I have seen all too often what is contained in the following videos that have now gone viral. Young lives destroyed by alcohol, drugs and mental illness. Former Celtics guard Delonte West has taken a self-destructive path since his days in the NBA, which four of those years were spent in Boston.

This is not funny 😕 #socialmedia I'm sure some of your family members are battling with the same demons. #DelonteWest pic.twitter.com/rulc1bYR69
— Own Your Masters (@ThaArchitect) January 21, 2020


West, who was the 24th-overall pick from the 2004 NBA Draft, had his best season during the Celtics 2006-07 campaign in which he notched 12.2 points, 3 rebounds, 4.4 assists and 1.1 steal per game as a starter. He was traded to the Seattle Supersonics in the summer of 2007 as part of a package that brought Ray Allen and Glen "Big Baby" Davis to Boston. West was signed by the Celtics for the 2010-11 season as a backup to point guard Rajon Rondo following a few years alongside LeBron James in Cleveland.

Two videos apparently show West getting beaten in the middle of the street near the MGM National Harbor casino in Washington D.C. and later on in handcuffs yelling out an unintelligible rant. He is clearly close to the end of the line and needs help quickly and desperately - or he could be found deceased in the near future.


Apparently Delonte West was seen getting beat up in the street this Morning. I went to school with him and it’s crazy to see just how his life has gone downhill since the NBA. pic.twitter.com/chm6Sbu9h6
— Measha⚡️ (@N90sKindOfWorld) January 20, 2020


Two years ago, I still had concerns about where Marcus Smart was heading in his life and NBA career. Since then, it seems certain that Smart has chosen the right path and not the route taken by Delonte West.

This video from two years ago was in my article, as was this excerpt:


"Marcus Smart had many problems growing up, according to the Boston Globe's Baxter Holmes. He had anger issues, tried to outrun gunfire, mourned the early death of his half-brother from cancer and always seemed to be avoiding the gang warfare in his neighborhood. Some anger issues seem to have resurfaced during his present stint with the Celtics in the form of two wall punchings in the last year, the last one putting him out of action for roughly two weeks.

"So the question now is, which path does Marcus follow. Hopefully, it is not the one chosen by Delonte West." [CelticsLife]

The Delonte West video is 2 years old. Latest new on him is tragic. Read my article coming very soon.


According to TMZ Sports, Delonte West's former agent Aaron Goodwin has confirmed that the man in the two videos is the ex-NBA guard, who is currently recovering from attacks with family members, but still needs medical attention.

West, 36, is reportedly being taken care of by close family, friends and even the NBA has offered support to him and his immediate family since the incident.


ESPN also reported that the Maryland police officer that filmed a shirtless and handcuffed West, while being questioned, has been suspended following the video going viral on social media.

Prince Geroge's County Police learned that the first of two videos that were circulating via Twitter where West was sitting on the curb, was recorded by an officer. An investigation was launched and the suspension was announced in a statement on Tuesday afternoon.

West and the man who he was fighting with, know each other, according to the police. Both men refused to press charges and receive medial treatment.

Money alone won't help West, but it may be a start. While he spoke back in 2015 about being diagnosed with bipolar disorder, he desperately needs a mentor now that has a passion for getting the former St. Joseph's standout back on his feet. If that doesn't happen, I doubt he will be with us for very long.