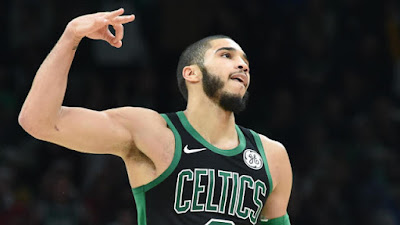 Jayson Tatum will join his teammate Kemba Walker in Chicago next month, as the Celtics forward was voted by league coaches as a 2020 NBA All-Star reserve.

Tatum found out about his first All-Star selection just prior to the Celtics tipping-off against the Golden State Warriors Thursday night at TD Garden, as he was making a return to the lineup after missing the last three straight games with a groin injury.


Congrats to my brother @jaytatum0


Tatum in just his third season, becomes the youngest Celtic to head to the All-Star Game since Antoine Walker in 1997, is averaging 21.5 points, 6.9 rebounds, 2.9 assists, 1.4 steals and close to one block per game, which are all career-highs.

This All-Star selection is a testament to how far Tatum has come since the work he put in during the offseason, especially when he and three other of his Celtics teammates were selected to play for Team USA and the FIBA World Cup this past summer, following a somewhat disappointing 2018-19 campaign. Though an ankle injury cut his experience short, being coached by a legend in Gregg Popovich has clearly paid dividends and then some for the 21-year old.


Jayson Tatum shares his excitement about being a first-time #NBAAllStar with @ALaForce! pic.twitter.com/5kdEUVeB4q
— NBA on TNT (@NBAonTNT) January 31, 2020


The 2020 NBA All-Star Game will be played on Sunday, February 16th in Chicago. LeBron James and Giannis Antetokounmpo are the two captains that will select their teams in the NBA All-Star Draft next Thursday, February 6th on TNT. Walker will be part of the starters pool selected first, then move on to select from the pool of reserves, which will include Tatum.