Celtics react to the tragic death of Kobe Bryant: 'My heart is broken,' 'Still in shock' 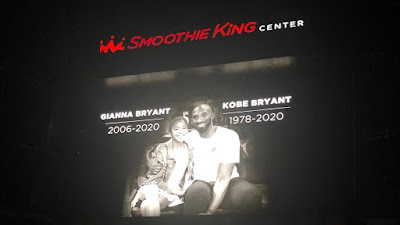 The NBA and the world is still very much in shock with the news of Kobe Bryant's sudden death Sunday morning. The Celtics and Pelicans were in disbelief, as they somewhat had to figure out how to play a basketball game at the Smoothie King Center just mere hours after learning of this terrible tragedy.

Bryant and his 13-year old daughter, Gianna were two of the nine passengers who died in a helicopter crash in Calabasas, California. While both locker rooms were closed to any media members prior to tip-off, players were visibly upset before and during the game, but it wasn't until afterwards that they got to share what they were feeling.

Though many took to social media before the start of the game, coach Brad Stevens and some of the Celtics players reacted to the death of Kobe Bryant following their 123-108 loss to the Pelicans.


"If people got to watch those games and watch the 24 second violations, and they got to appreciate that as fans, then I think we're happy to do whatever we're asked to do," Stevens said regarding the NBA's decision not cancel Sunday's game. "If it brings somebody, somewhere a little bit of a distraction in an otherwise tough day, then that's OK too."


Stevens was the only member of the Celtics who spoke prior to the game about Bryant's connection to the Celtics over the years and how he was someone many of his current players looked up to growing up, especially Jayson Tatum, who didn't talk to the media at all.


"These guys... the way that I describe it, being a 43-year-old is Kobe is their Jordan," Stevens said.

"I just said that he's one of the guys that probably broke the hearts of the Celtics more than anybody that's ever played," Stevens added. "In his last year our guys were all sneaking around getting his shoes signed and everything else, just like everybody else, right? I know a lot of our staff did, too. It's so sad." [MassLive]

Marcus Smart and Jaylen Brown admitted that it was tough day to play a game considering the circumstances.


"I think it was hard to play for everybody. Just around the league it was," said Smart. "We still can't believe that it's true. I think in the back of our minds we're still wishing and hoping that it's not. But it's just tough. It's tough for everybody out there and it was a tough night for us.

"Still in shock and non-belief about the situation. I mean, just what Kobe meant to this game of basketball, the things he did to open up passageways for guys, and just the hard work that he's put in, the dedication that he's given over the years, his life to the game. This is a tough one. It's a tough one for anybody that grew up watching him, who's a fan, who's a loved one, it's tough."

Brown was asked how Tatum was holding up and what he said to his teammate, while also mentioning how he never got the chance to ever meet Bryant and thank him.


"I just dapped him up and put my hand on his head and I didn't really have to say much. I know he looked up to him, he's inspired by him, got to work out with him. I know what he was probably feeling in that moment. To me, I never got the chance to shake his hand and just tell him thank you for how much he inspired me, growing up playing the game of basketball and how much he inspired many. It's tough for all of us. I know it's tough for Jayson."


All-Star guard Kemba Walker spoke about how Bryant inspired him as a player over the years, especially after meeting him as a teenager.


"It's tough. It's tough. Kobe's a guy who's impacted so many lives, so many basketball player so around the world. To hear the news about him and his daughter today, it's tough for everyone. It's just sad."

"I was blessed enough to meet Kobe at a young age when I was in high school. My high school, we were actually a Kobe team. Just to see him, his presence, had an impact on me. You just always knew how hard he worked. That was the biggest thing for me, his work ethic and his mentality about the game. That is what has inspired me the most, personally." [MassLive]

Gordon Hayward spoke about the initial shock of the news that Bryant had passed away and how being a father or a parent made the day that much more difficult.

"I didn't know that it was real, to be honest. I had to look it up for myself. I was heartbroken. Heartbroken for his family. Being a father, my stomach was hurting. It still is hurting. There's nothing that you can say to make it better, but certainly praying for him and his family. It’s just so tragic. It was tough today, It was definitely tough. I've had a relationship with him. He's been nice enough to take his time, and took his time out and showed me things, to text me, the message that he sent me. So it was tough."

"It was different today," Hayward added. "I think being a father too, my heart is just broken, for his wife, his other daughters. I think everyone that's a father understands that, or a mother, so it was difficult."


The Celtics released a statement via all their social media accounts sending their condolences to the Bryant family and all the other families affected.


"There are no words that can convey the heartbreak the entire Celtics organization feels in the wake of the terrible loss of Kobe Bryant and his daughter, Gianna. Kobe was one of the greatest talents and competitors to ever play basketball, and his love of the sport inspired countless fans and players around the world. Our fans were fortunate to watch him as he contributed many memorable chapters to the Celtics-Lakers rivalry, which he treasured. We extend our deepest condolences to Kobe's family, fans, and the entire Lakers organization, as well as all of the victims and families affected by this horrible tragedy."

Of course there were many former Celtics players like Paul Pierce, Kendrick Perkins, Cedric Maxwell and even Bill Russell, who posted their thoughts on what Kobe Bryant meant to them.

My new motto with everything is, What Would Kobe do? He’d want us to focus more on the loss of his daughter. He’d want us to get past differences with our brothers and move on. He’d never want the game to be cancelled or be stopped. He’d want us to keep going! #RIPKOBE🙏🏾🙏🏾🙏🏾
— Kendrick Perkins (@KendrickPerkins) January 27, 2020

Everyone in #Boston is draped in purple & gold today for #Kobe.

Prayers To the Bryant family, the #Lakers family and the entire #NBA community.

Jeannine & I are absolutely shocked to hear of the loss of one of my favorite people & one of the best basketball minds in the history of the game! Our hearts & prayers to Vanessa & his girls. @kobebryant you were my biggest fan, but I was yours #RIPMAMBA @NBA @espn @SLAMonline pic.twitter.com/Ll0BD6VWgr
— TheBillRussell (@RealBillRussell) January 26, 2020


"He would definitely come over and speak to me," said Maxwell. "Our seats were right next to the Lakers' bench and before one of the games I had on a purple tie, Kobe looked at me and said 'purple tie huh?' And I said well this is in honor of you, it was his last game and he dapped me up. It was just so cool...and I will always have that as a moment. I have a great picture of Kobe and I together, it just seems so unreal."