Five Takeaways from Celtics win over the Pelicans 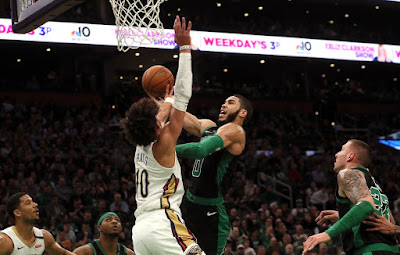 The Celtics broke their three-game skid with a convincing 140-105 victory over the injury-depleted New Orleans Pelicans last night.

Here are five things we've learned from their impressive victory at home on Saturday night:

A day off is just what the team needed


After losing a season-high three straight, the Celtics had played five games in seven nights and coach Brad Stevens gave the boys a day off following their loss to the Sixers on Thursday. They needed it, and the break was well-timed. Despite the Pelicans being without four key players in Zion Williamson, Jrue Holiday, Derrick Favors and JJ Redick, don't get too high on the win. Just as the Celtics shouldn't have sunk so low on the three-game losing streak, getting too high on this victory would be a mistake.


When the ball moves like it did against the Pelicans, it seems that the Celtics are close to unbeatable. Call it youth or lack of seasoning, but Boston too-often goes into spells of iso-ball, and it becomes a hit-or-miss proposition.

We got a preview of what Jayson Tatum can become

Jayson Tatum's career night -- 41 points on 16-22 shooting (6-of-9 from 3), 6 rebounds, 4 assists and 3 steals was a demo of what he can become, but he can't be classified as a transcendent player - not yet. Can he get to the level of Larry Bird, Michael Jordan or LeBron James, a franchise star whose talent rises above every other NBA player? That remains to be seen but this kid is special.

NBA TV's Sam Mitchell suggested that their is a comparison to be made of Kawhi Leonard and Paul George when it comes to Jaylen Brown and Jayson Tatum. The Celtics young stars have become complete two-way players and have not yet peaked. The duo has truly evolved this season, and we haven't seen their best yet. Reaching the level of The Claw and PG13 is achievable. Plus we can see vast improvements in all areas of their game, such as Brown averaging 76.8 percent from the line this year. That is a significant improvement from his 65.8 percent free throw shooting from last season, which is no accident.

Gordon Hayward scored 19 points on 8-of-11 from the field and 2-of-2 on treys, while adding five rebounds, three assists, one steal and one block. He had a team-high plus/minus of +38. He always seems to make that extra pass that results in a score, and he is the veteran glue that holds the team together. Enes Kanter had a double-double with 22 points in 23 minutes and 19 boards. His scoring came on some down-low isolations and nice feeds from his teammates. His $5 million salary this season is starting to look like a bargain.

Though the question of whether Celtics small-ball will succeed in the playoffs has not been totally answered, it seems at times the core-five with a max height of 6-foot-8, can survive the slowed-down, half-court play of the postseason depending on matchups. Will they be crushed on the boards and bullied down low? Not if the team plays like it did against the Pelicans. Enes Kanter asserted himself, and his teammates obliged. When Kanter gets it going down low, he can be a potent weapon on offense, and he is a powerful rebounder. If his defensive skills continue to get honed, The Celtics should be okay in the playoffs.

The Celtics host the Chicago Bulls at TD Garden Monday and we will get a chance to see if the lessons from their smooth showing over the Pelicans sink in for more than a day.