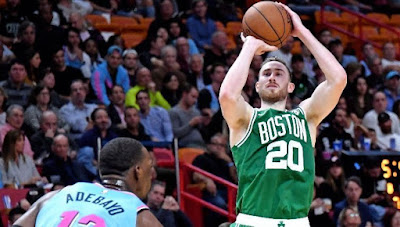 The Celtics bounced back after a difficult loss to the Pelicans on Sunday and beat the Miami Heat 109-101 at the AmericanAirlines Arena, where only two other opponents have won all season.

Gordon Hayward had a game-high 29 points on 10-of-14 shooting and to go along with 9 rebounds, which gave the Celtics forward a third consecutive 20 point scoring output -- the first time he's achieved such a feat since signing with Boston as a free agent in the summer of 2017.


"Every game is important," Hayward said. "Every single one we play is important in the playoff race. We're all so close together so each one we have to treat it like a playoff game. That's just how tight it is."

The Celtics are now 31-15 on the season, but still remain with the fourth best record in the Eastern Conference with only a one game lead over the Philadelphia 76ers (31-17), who are currently in fifth. Despite the loss to Boston, the Heat (32-15) have a half game lead over the Celtics as the third seed and the Toronto Raptors (33-14) are a full game and a half ahead for second place.

If you count the Indiana Pacers (30-17), who are a half game behind the Sixers with the sixth best record in the East, that makes five teams that are all separated by only three games in the standings that are chasing that second seed.

While the Celtics for much of the first half of the season were sitting comfortably behind the Milwaukee Bucks (41-6) with the second best record in the East, they now find themselves in a tight race for playoff seedings as things start to become much more complicated with each day that goes by.

Jaylen Brown returned to the lineup after missing the previous two outings with an ankle injury, scoring 25 points -- on 10-16 shooting and handing out 5 assists for the Celtics, who were playing without Jayson Tatum (groin) for the third straight game.

Kemba Walker had a poor shooting night (5-19) but ended up with 16 points and 8 assists, while Daniel Theis notched a double-double of 10 points, 11 rebounds and was a big reason for why the Heat were held to 37.1 percent from the field.

Boston jumped out to 13-point first quarter lead after hitting five 3-pointers to open up the game before the Heat switched to a zone defense in the second period. After a very brief lead by Miami, the Celtics took a 53-48 advantage into intermission.

Goran Dragic led the Heat with 23 points off the bench and Jimmy Butler added 20. Bam Adebayo had his own double-double of 16 points and 10 rebounds, while Duncan Robinson chipped in 12 points for Miami.


"Guys did a really good job of attacking it," said Celtics coach Brad Stevens. "Once we got a comfortable rhythm against it we were a little better. It's hard to score on those guys."

The Heat never lead in the second half and Marcus Smart (11 points, 8 rebounds and 4 assists) hit a 3-pointer with 1:50 left to play and put Boston up by eight to seal the win.

The Celtics are 6-4 in their last 10 games and became the first team in the East this season to beat the Heat (21-3) at home after the conference had been 0-13 so far. They'll travel back to TD Garden and host the Golden State Warriors on Thursday before they welcome the Sixers Saturday night.

The tributes to Kobe Bryant, who was killed in an helicopter crash along with his daughter Gianna and seven others on Sunday, continued throughout the NBA. Both coaches Stevens and Eric Spoelstra and their staff wore Bryant's signature shoes -- a gesture other coaches around the league made as well.

Celtics hit 47 percent of their shots and assisted 24 times on 39 made baskets, while Boston also finished with 8 blocks (Smart swatted three and Theis two). Enes Kanter (hip) missed his third game, no word on when he will return.