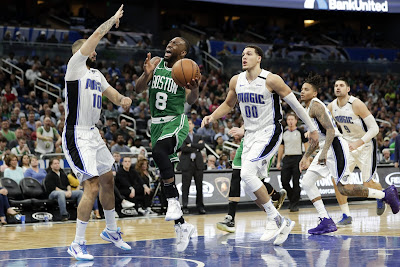 The hospital Celtics, winners of their last two in a row, came into the Amway Center without Jaylen Brown (ankle), Jayson Tatum (groin) and Enes Kanter (hip) in the lineup and pulled of a 16-point comeback to beat the Magic 109-98 Friday night.

Kemba Walker, fresh off his NBA All-Star starting nod, led all scorers with a game-high 37 points on 12-of-23 shooting from the field, including 6-of-12 from behind the arc and added 6 assists on the night.

Boston faced a 46-30 deficit in the second quarter, as Walker scored 19 to help his team single-handedly climb out of hole hitting 10-of-16 shots and four 3-pointers to cap off the first half.


"I thought Walker gave us everything he had in the first half and we were worried whether he would have much left," said Celtics coach Brad Stevens. "It was up to everyone else to take it to another level at that point and fortunately we did."

Gordon Hayward scored 12 points, grabbed boards and dished out 4 assists in the third quarter to wipe away the Magic's double-digit advantage and go ahead 82-77 -- the first Celtics lead of the night -- while Walker was resting on the bench.


"Obviously, we had some of our top scorers out, so I tried to be more aggressive," said Hayward, who finished with 22 points, 14 rebounds and 5 assists on the night. "I always try to be a playmaker and help the bigs out on the boards."

The Celtics turned up the defensive intensity in the second half, holding the Magic to 32.6 percent shooting and only six assists on 14-of-43 made baskets.

Walker hit a 3-pointer in the opening moments of the final frame and then a second from the top of the key to give the Celtics a 95-81 lead -- their largest of the night with 8:46 left to play and never looked back.

Still, the Magic made it interesting down the stretch after Evan Fournier (30 points) and Terrance Ross cut the Celtics’ lead down 103-98 with 2:29 remaining, but Orlando failed to score the rest of the way.

Nikola Vucevic notched a double-double of 17 points and 12 rebounds, while Aaron Gordon chipped in 12 points for Orlando, who are now 21-25 on the season.

Daniel Thies scored a career-high 16 points on 7-of-12 from the field, to go along with 6 rebounds and 4 assists. Rookie Grant Williams, who got the start for Tatum, added 9 points and 3-of-4 from 3-point range to give the Celtics their third straight victory (30-14) and Brad Stevens his 300th win as the C's head coach.


"You have to focus even more so when guys are out to do your jobs as well as you can," said Stevens. "That's what good teams do. You have to play with that kind of effort and do the little things that win games."

The Celtics will travel to New Orleans and face the 17-29 Pelicans on Sunday afternoon before heading to Miami Tuesday night.

Celtics shot a total of 46.5 percent from the floor and finished with 27 assists on 40 made buckets, while outscoring the Magic 42-36 in the paint.