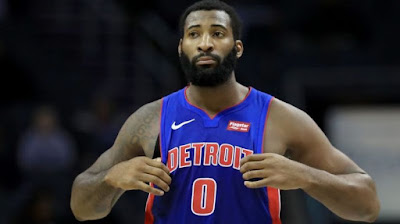 There was a time when burly center Andre Drummond would have been a good fit with the Celtics, however that time is not now.

With the Detroit Pistons reportedly engaged in discussions with other teams about a trade for Drummond, the odds of Boston making such a deal allegedly are among the best at 5-1, but it shouldn't happen.


Where will Andre Drummond finish his season?

Check out all of our #NBA trade deadline props at the link below:https://t.co/bUvnspgJpu pic.twitter.com/elb2laD9hP
— BetOnline.ag (@betonline_ag) January 7, 2020


One of the high-salary players on this current Celtics roster would have to be sent to Detroit to make the dollars work, and forward Gordon Hayward's contract could make such a trade possible. But why do it?

This is not to say that Drummond would be an upgrade at the center spot, but to send away a talent the like of Hayward would be preposterous. Both Hayward and Drummond have player options for next season, so there are question marks surrounding the two of them. The only reason Danny Ainge would make such a deal prior to the trade deadline would be that he felt making that move (Hayward-for-Drummond) would increase Boston's chances of raising Banner No. 18 this season.

Without comparing talent levels, Kanter and Drummond are similar in size and skills. Plus, Daniel Theis' contributions at center can't be ignored. The Kanter-Theis pairing has worked reasonably well this season. Why tamper with it? While odds may say "Yes" to such a trade, but logic says "No." I can't envision Ainge even making an inquiry about such a move.