Why the Gordon Hayward critics need to 'come to their senses' 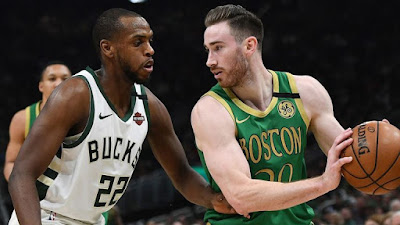 I am not about to hop on the anti-Gordon Hayward bandwagon. He has had too many solid, even great games this season to do that.

By the numbers, this year Gordon Hayward has set career highs in field goal percentage (51.6%), free throw percentage (86%) and rebounds (5.9). I took the liberty of mathematically adjusting his stats this season to mirror his minutes (34.5) from Hayward's lone All-Star 2016-17 season with the Utah Jazz. He currently averages 31.6 minutes per game so far for the 2019-20 campaign.

It is amazing to see how quickly Celtics fans turn on Hayward after one bummer of a game, such as Thursday night's 128-123 loss to the Milwaukee Bucks. Hayward scored only seven points in 32 minutes of action and was missing almost every shot he took. He came away shooting a putrid 1-of-10 from the field and 1-of-9 on treys. But I quickly remind my readers that he is hitting 51.6 percent of his field goal attempts - a career-high - for the season. Erratic shooting can plague any NBA player - at any time - even the true marksmen.


Jayson Tatum had the best game of his life on a night where Jaylen Brown and Gordon Hayward also played. But remember, have to trade Gordon because he's holding them back!
— Dan Greenberg (@StoolGreenie) January 12, 2020


Don't totally believe in your senses. As Scrooge said in A Christmas Carol, "a little thing affects them." The eye test may be flawed. Poorly-based bias can set in. I'm sticking with the numbers when it comes to Hayward. They don't tell the whole story, but numbers don't lie.

Gordon Hayward is having a fine season, but the naysayers come out of the woodwork after a bad game. The numbers tell us that Hayward's present season in Boston is damn close to what he had in his 2016-17 All-Star campaign in Utah. With the NBA trade deadline less than three weeks away, many fans would move him in a heartbeat. The Ghost of Christmas Past took Ebenezer Scrooge back in time to bring him back to the fine realities of the world. I have brought my readers back several seasons - and hopefully helped them "come to their senses."


For those that "have taken leave of their senses" and gone after Gordon Hayward after his off-shooting night, my article is imminent.