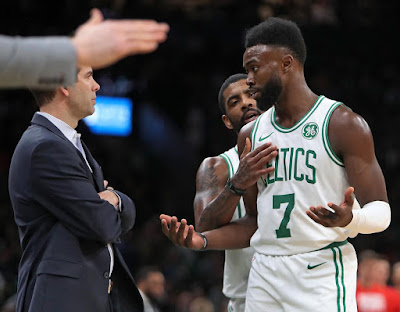 Contrary to the popular beliefs of returning players and coaches, it's been an ongoing narrative amongst diehards, however, Jaylen Brown isn't blaming his former point guard, instead, he says it's the organization at fault. In a recent interview with Brandon 'Scoop B' Jackson of Heavy.com, Brown said the blame lies on the front office along, including his head coach, Brad Stevens.


"Everybody is going to have their own opinion," Brown said. "I don't think Kyrie (Irving) cares too much, maybe he does, and maybe (Kyrie) shouldn't care as much as he does. He's Kyrie Irving at the end of the day... nobody is perfect. Kyrie got a lot of the blame and was undeserving. It wasn't his fault that certain guys couldn't take a step back. It wasn't his fault. That was the front office and the coach's fault.

"It's in the past. Kyrie is in a better place in Brooklyn, somewhere his roots are. He'll be fine." [Heavy.com]

Celtics president of basketball operations Danny Ainge and Stevens have continued to accept blame for last season's shortcomings. They'd certainly co-sign Brown's opinion, however, this is the first time a player has openly pointed the finger at management for what went wrong last year.

When the topic of Brown's current point guard, Kemba Walker, came up, Brown had nothing but nice things to say about the All-Star.

Brown, the team's most recent contract signing who accepted a four-year extension worth up to $115 million, is on pace to have a career year. He's averaging 19.3 points, shooting 50 percent to go with his 6.9 rebounds.