Why Isaiah Thomas deserved a tribute from the Celtics

On a cold brisk and windy December night in Boston, with the temperature in the single-digits, it was Isaiah Thomas who was closing out his 2016 by lighting up the Miami Heat at TD Garden.

I was present at the arena to witness the then Celtics All-Star go 9-of-13 from behind the arc and set a new franchise record for the most points in a quarter, scoring 29 in the fourth while passing Larry Bird (24) on his way to 52 points, which was a new career-high at the time and beat the Heat 117-114.

It was ironic considering how cold it was outside, but for those two hours and some change, Thomas made you watch and appreciate him.

Thomas had just 10 days prior scored 44 (then a career-high), in a 17-point comeback win against the Memphis Grizzlies. The former Celtics guard was in the middle of 42 game streak of scoring at least 20 points or more during his infamous 2016-17 campaign. 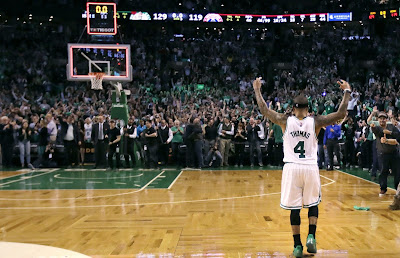 The 'Little Guy' finished fifth in the NBA's Most Valuable Player voting and by August of 2017 he had been shipped off to Cleveland for All-Star Kyrie Irving.

Nearly a year and a half later and Thomas finally was an active player in his return to the TD Garden on Monday night.

In a 114-105 Nuggets win over the Celtics, Thomas' team not only won and clinched a playoff berth in the process, but the former All-Star got a well-deserved and long-overdue video tribute from the franchise that believed in him more than any other.


"I didn’t think I missed in this building," Thomas said afterwards. "But I was just glad that I was able to get out there and play no matter how long I played. It was fun to be able to do that in front of the best fans in the world."

Thomas is currently sixth on the Celtics all-time 3-point leaders list with 460 made, while Avery Bradley, who played seven years in Boston, is fifth with 520, just to put things into perspective.

It was only two and half years, but Thomas became a superstar and the face of the Celtics standing only 5-feet, 9-inches tall.

While the Celtics continued to overachieve during Thomas' time in green, he attracted the likes of sought after, All-Star free agents to Boston (i.e. Al Horford, Gordon Hayward), something never done in the franchise's past nor Danny Ainge could even pull off during his tenure as general manager.

Let's not forget that if it weren't for the MVP caliber type of season Thomas had, the Cavaliers would never have had any interest in swapping point guards, especially after competing against each other in the Eastern Conference Finals five months prior, that was un-heard of.

Thomas is arguably responsible for the current Celtics roster, who is considered a championship contender, despite their inconsistencies this season.

If Thomas were to never regain his All-Star form again, it would be because of the fact he played injured throughout the unexpected deep Celtics playoff run in 2017, not to mentioned playing after the death of his sister.

Who could forget his career-high, 53-point performance in Game 2 of the semi-finals, where the Celtics beat the Wizards in overtime on what would have been Thomas' sister Chyna's 23rd birthday?


"I went through a real life situation here when I lost my sister that this whole city and organization went through with me," Thomas said on Monday. "And I think that's why, other than ... the love is always there, but that's what took it to another level.

Thomas might have been the shortest guy on the court, but he's always had the biggest heart, that some would believe is something this current Celtics team is lacking at times.

So what do I say to those that are somewhat confused or questioning why Thomas was even given a video tribute by the Celtics to begin with? It's simple really, because no other former or current Celtic made you fall in love with his talent or skill set, plus his personality on and off the court, while the team succeeded in such a short (no pun intended) amount of time more than Thomas did since Kevin Garnett a decade earlier.

He wasn't expected to be more than a sixth-man when Thomas came to Boston, let alone become the Celtics' best player and face of the team.

As I stood up and applauded like the rest of the 18,000-plus basketball fans at the TD Garden to say thank you I.T., I was only reminded of December 30, 2016, that cold night with the wind chill well in the negatives, as Thomas convinced me he was indeed something special and not just the "King of the Fourth."

That would be the last time I would see Thomas play in person, until his return in a Nuggets uniform. Even though he's made three stops in Cleveland, Los Angeles and now Denver since Danny Ainge traded him, I don't believe his story is unfinished.


"It was special here, but I didn't understand that until I wasn't here anymore," Thomas said about playing in Boston. "I was so locked in in those moments that I didn't really know what was happening."

Like any other of his supporters in Boston, of course I would love to see him come full circle and return to play as a Celtic, but it doesn't mean it will come to fruition as he continues to battle back from a hip injury that finally needed surgery.


"My options are always open no matter what it is, and I mean if I end up here at some point, that would make the story that much better," Thomas added.

In any case, I have to agree with the man I.T. was traded for when it comes to Thomas' future.


"First and foremost we all understand that personal emotions and business don’t really mix, especially in the NBA," Kyrie Irving said Monday night. "You have a plan where you would like to stay somewhere and the organization moves in another direction, and we respect all those guys who are in the top positions to make those decisions. But you could just see the connection that guys have with fans that they build in the community stick with them for the rest of their careers.

"It’s well-documented what he’s done here," Irving added. "For me, it’s a unique position because I’m the one who got traded for him, so I just want to see him do well. We got drafted in the same year, he’s dealt with a lot of BS in his career just trying to be the underdog all the time instead of getting the opportunity he deserves, and Boston gave him that opportunity and he flourished. Unfortunately he had that hip injury, but he’ll be back at the top of his game in no time. You don’t ever have to worry about a talented guy like that finding a job in the NBA and making an impact somewhere."


Until then, all should watch Thomas' video tribute from the Celtics below, whether you believe he earned one or not.