If Gordon Hayward is back, it changes everything for Celtics 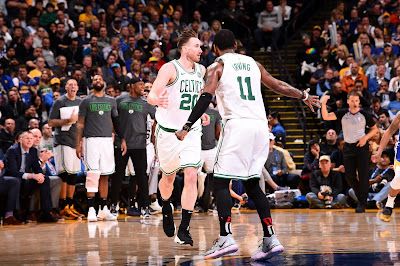 OAKLAND -- No other Celtics player has had a season quite like Gordon Hayward.

The anticipation of his return to the floor was magnified from the moment he suffered the gruesome ankle injury last season to the night he first stepped onto the court of a Celtics exhibition game against the Hornets back in September. Give him a few months and we'll see the same player that led the Jazz in the 2017 playoffs we said, the same player who was an All-Star, whose reunion with his college head coach Brad Stevens, coupled with Kyrie Irving and Al Horford, will be the recipe for success that is at least seeing the Celtics in the NBA Finals.

Months came and went, still, no promise of the old Hayward. Sure, there were flashes here and there, a la a pair of 30-point performances against the Timberwolves and an impressive showing against the Sixers but finding consistency has been a struggle.

Statistically, Hayward's scoring is subtly trending upward, improving on a month-to-month basis but when the assumed championship-contending Celtics are sitting comfortably in the fifth seed and dropping games against the league's bottom feeders (Knicks, Suns, Bulls) and elite teams (Bucks, Raptors, Rockets), the idea of seeing Hayward back to form was essentially dismissed. For most, it was stashed in the "wait for next year" folder, while the Celtics would have to settle for the 10-point scoring Hayward instead of the 20-plus point scorer he used to be.

But after seeing Hayward put together a flawless 30-point show against the champion Warriors Tuesday night at Oracle Arena, we could be seeing the Hayward of old sooner than expected. He was masterful.

Hayward drained 12-of-16 from the floor, including 4-of-6 from behind the arc to go with his 7 rebounds, four assists and a pair of steals. Golden State couldn't slow him down as he meticulously picked his spots, drove to the rim and led the Celtics to a 128-95 blowout win.

Hayward established his offense around the basket early on, which eventually led to open looks from the perimeter as he sprinkled in open elbow and mid-range jumpers that found the bottom of the net.


"Some of it is just taking what the defense gives me," Hayward explained after the game. "When the first one goes down, it's a really good feeling, it makes them kind of respect that jump shot. I've always been a guy that gets to the rim first and tries to get into the lane so that opens up that game for me; just a good shooting night for me."

The Celtics hope this momentum will carry over to Sacramento Wednesday, the second night of a back-to-back set against a young hungry team with playoff aspirations in the Kings. Still, it's hard to not envision a playoff Celtics team equipped with a veteran like Hayward playing at the level we saw Tuesday night in Oakland, and what the would mean for Boston's championship dream.

It would be the difference between the Celtics bowing out in the Eastern Conference Finals and a potential Game 7 against the champion Warriors for a title. The margin is that wide when you consider how many other teams have a player with the potential of doubling his scoring numbers of the regular season in the playoffs.


"Confidence level, that's really what it comes down to, especially in this game of basketball," Irving responded when asked about what he saw from Hayward Tuesday night against the Warriors. "He's just huge for us and we need him to be confident and we need him to be who he has been for nine years. Just continue to get better as a player, as he has shown in this league.

"He's a veteran presence in this locker room and he's been through a lot so we just want to support him and we want him to play well."

That confidence was oozing out of Hayward. And it doesn't seem like it's going to go away anytime soon.

Three of the top teams in the Eastern Conference all improved its roster the past few weeks. The Raptors traded for Marc Gasol, the Bucks added perimeter shooting from the buyout market and the Sixers added another scorer to their starting lineup in Tobias Harris.

Meanwhile, the Celtics stood pat. Stevens and Danny Ainge believe in Boston's deep roster, they were hopeful the team would figure things out in the fourth quarter of the regular season, knowing the emergence of Hayward could be in the cards for them if they remained patient without making any changes to the rotation.

So far, it's paid dividends for Hayward. Well, for one night at least. For the rest, we'll have to wait and see but from a team's standpoint, the foreseeable future looks promising.