Update: Jayson Tatum (shoulder) downgraded to 'out' vs Clippers 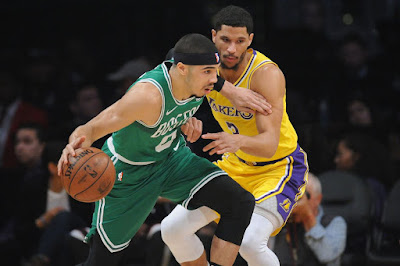 The Celtics announced Monday afternoon that forward Jayson Tatum will be out for the team's matchup against the Los Angeles Clippers due to right shoulder soreness.


#NEBHInjuryReport Jayson Tatum has been downgraded to OUT. https://t.co/mxntQxr36d
— Boston Celtics (@celtics) March 11, 2019


On Sunday the team listed Tatum's status as questionable before being downgraded less than 24 hours later.

Tatum is the only Celtic on the roster that hasn't missed any of the team's 67 games played this season. The newly turned 21-year old forward missed two games during his rookie campaign. Tatum is currently averaging 16.1 points (on 45 percent shooting) and 6.2 rebounds.

The second year forward, who celebrated his birthday in Los Angeles this weekend, finished with a quiet 6 points, 5 rebounds and 5 assists in the Celtics win over the Lakers on Saturday night.

Boston will tip-off against the Clippers in their California road trip finale on Monday night at 10:30 PM ET from the Staples Center.