Kyrie Irving says Trae Young 'has potential to be a special player,' reflects on his rookie season 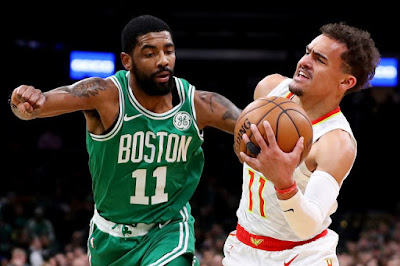 It was his rookie season in the NBA. He couldn't wait to prove himself against the other young point guards in the league, against his favorite point guard, Chris Paul, but instead the Raptors guard got the best of him.


"He bust my ass the first time I came to the league, I still can't believe that (expletive)," Irving said. "I just couldn't believe it, gave me like 22 (points) and 14 (assists). Like, Jose Calderon? But around that time for Toronto, 2011, he was a great piece for them, you know. And I held onto that, every time I see him to this day, I'm still going at him."

Irving reminisced on his rookie days after seeing one of this year's best in Hawks guard Trae Young. Behind 26 points on 10-of-17 shots, the rookie of the year candidate led his team to a comeback that erased a 25-point deficit in the final frame.

Tied at 112, the Celtics proceeded to go on a quick 5-0 run following a timeout called by Brad Stevens and it was enough to keep the Hawks at bay as Boston eventually sealed a 129-120 win over the Hawks in a matinee at TD Garden. The victory was the Celtics' fifth in their last six games.

Although the Celtics held on, head coach Brad Stevens said giving up a 25-point lead was still upsetting.


"It's maddening because what happened in the end of the third, early fourth, was ratcheted up their pressure and we were on our heels and you could see it," Stevens said. "I mean, you could hear their bench one time yelling, "Go, go, go!" You knew a trap was coming and we turned it over, right? We were on our heels, they were attacking us but the other team's out there too and so I think that you ultimately have to realize that's part of a game. You have to be able to move on to what's next."

Atlanta couldn't have done it without Young. Through three quarters he scored 20 points, including 4-of-6 from deep -- which planted the seeds for the Hawks to complete their comeback.

He's been terrific throughout the second half of the season, Young is seemingly the only threat for rookie of the year over Luka Doncic -- something Irving recognizes about the first-round pick when he was asked about Young's game.


"I'm greatly impressed," Irving said. "Just to see his evolution from October all the way until now. He's definitely in contention with Luka for rookie of the year. It's probably going to be one of the closest races in a little while, just for how successful those guys have been but he's just been growing and maturing. Their coach is putting him in a great position to be successful.

"Coming off those double drags, him and John Collins have a great friendship, as you can see, on the court and off the court. It's just great to see young guys like that develop, coming in and proving everybody wrong. First in October, everybody said 'He's too small to play. He's this, he's that' and now it's just like, he actually has potential to be a special player in this league."