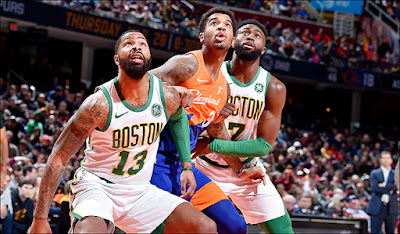 Celtics forward Jayson Tatum bounced back from his shooting funk with an impressive performance against the Cavs Tuesday night in Cleveland.

For only the second time since before the All-Star break we saw Tatum finish with 20-plus points as he scored 21 points in a 116-106 win, snapping a four-game skid -- the longest Celtics losing streak of the year. Without Kyrie Irving, Tatum finished 9-of-17 from the floor, caught fire in the first half, where he scored 19.

We've seen this before from Tatum, it's been an ongoing pattern throughout the regular season. In games when Irving has the night off, the second-year forward has had some of his best performances of the year.

From Tatum's incredible first half, guys like Marcus Smart (21), Al Horford (19), and Gordon Hayward (15) took it from there and ran with it -- they combined for 55 points. Cavs rookie Collin Sexton finished with a game-high 24 points and Cedi Osman added 15 points and 7 rebounds.

Throughout the last six games Irving's missed, Tatum averaged 21.5 points. The Celtics went 6-0, and in games when Tatum leads Boston in scoring, Irving is either having an off-night offensively or on the sidelines in street clothes. For one reason or another the two haven't been able to put it together on the same night.

However, if the Celtics are going to make a deep playoff run, they're going to need to figure it out and see Irving and Tatum collectively dominate the offense. Brad Stevens has to find a way to get the best out of both of his best scorers on a night-to-night basis in the postseason.

Having a solidified second go-to scorer will strengthen a Celtics team that will have to take on the tall task of competing on the road whether or not they have home court advantage throughout the first round. Boston's depth on both ends of the floor will play a big part in their hopes of making it far but the Celtics' most impressive wins exemplified extraordinary offensive outings, with either Irving or Tatum leading the way most of the time.

It's difficult to pinpoint exactly why Irving and Tatum can't seem to mesh the way most of us anticipated heading into the 2018-19 campaign. Although Irving has recently made a conscious effort in setting up his teammates, it hasn't always materialized into wins recently, thus Boston dropping five of its last six prior to Tuesday night, or sparked Tatum's offensive production.

Aside from Irving, Stevens doesn't have another player who can create offensively the way Tatum can. Tatum's approach in knowing when to take his defender to rim and when to pull up for a jump shot has improved throughout the course of the regular season, while playing off of Irving -- a ball-dominant point guard, who can often takeover a game and simultaneously make things difficult for Tatum in knowing how to co-exist offensively.

With a challenging back-to-back, home-and-away set against the Pacers and the Nets Friday through Saturday, the Celtics will have their work cut out for themselves as they fight for the fourth seed in the Eastern Conference, trailing Indiana 1.5 games.

Celtics: For the first time since last November, Marcus Morris came off the bench as him and Gordon Hayward led the second unit to 52 points.