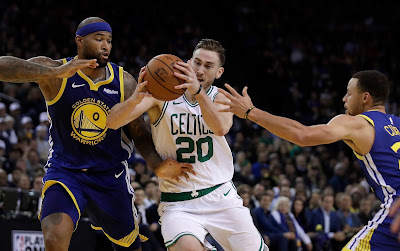 Feels like we've asked ourselves this question at least eight times this year, but this time it's different. The Celtics not only blew the champion Warriors off their own floor, they bullied them, stole their lunch money and snatched away any hopes of making an enormous comeback.

Golden State never led once Tuesday night. Boston held its opponent to a 40 percent clip from the field, forced 22 turnovers and handed Warriors head coach Steve Kerr the worst home loss of his tenure. And while the Celtics were putting the finishing touches on a 128-95 win, the defense didn't take its foot off the pedal, holding the Warriors to under 100 points.

Boston put forth the effort on both ends of the floor and eventually sucked the life out of the champs, while the Warriors couldn't find a way to significantly cut their deficit. Prior to tip-off, Brad Stevens talked about a particular vibe he felt within his team -- it was a big reason why he felt good about the Celtics' chances of topping the Warriors in their own building.


"Our vibe's been great the last couple of days, probably the best it's been in a while to be honest" Stevens said before the Celtics took the floor. "It's all well and good but it goes back to how you play. These guys are prideful, they're professional basketball players; playing well is a big part of that equation."

The positive vibes resonated throughout the night. Before the game, guys like Kyrie Irving and Jaylen Brown joking around before tip-off, and while Celtics players competed on the floor, you could see the others on their feet and cheering on their team.

The Celtics' body language spoke volumes for a confident team that was coming off of losing five of their last six games. The chemistry that we hadn't seen all season suddenly clicked Tuesday night at Oracle Arena, where Boston finished with 38 assists while shooting 51 percent on 49-of-96 from the floor.

Gordon Hayward's game-high 30 points off the bench led the charge, while Kyrie Irving poured in 19 points and dished out 11 assists.

The All-Star point guard also agreed with Stevens when he was asked about the positive vibes that his head coach mentioned hours before game.


"He's right," Irving responded. "That long plane ride helped us out, I'll just say that. That long plane ride helped us out, we needed it. We needed it. We were going to get to a point where we were going to just get tired of fighting each other, fighting the outside world and it doesn't even matter. We wanted to come out here and just play basketball, this is our sanctuary and we have to do everything to protect it. We can't let anybody infiltrate this."

Jaylen Brown added 18 points, while Jayson Tatum chipped in 17 for the Celtics, who are now 39-26 on the season.

Stephen Curry (23), who shot 8-16 from the floor for the Warriors, was one of only three players for the home team to score in double-figures. Kevin Durant (18) and DeMarcus Cousins (10 points and 9 rebounds) both struggled shooting, going a combined 8-of-28 from the field.

From a defensive standpoint, Boston took things to another level. It's what eventually triggered the offense and you saw a level of effort we haven't seen from the Celtics in a long time.

Players we not only encouraging each other but they were also helping one another to defend and taking the extra step to execute the offense efficiently.


"When we step into this locker room, nothing else should really matter," Irving explained. "That's a hard thing to come to grips with, it comes with a lot of sacrifice. We're away from our families, you can make every excuse in the book but here we have a mission that we want to accomplish and we can't let anyone get in the way of that, even ourselves. So, just as selfless as we can be, every single night.

"Obviously, we're not going to make every shot like we did tonight, I told these guys, we're going to have to battle through some tougher road games as we continue to go on and we have to be able to stay the course, stay together and still have a defensive identity. We'll be fine every single game if we do that and we stay connected."

Celtics will look to carry on their momentum from Oakland to Sacramento -- where they'll take on the Kings Wednesday night.

Celtics hit 41 percent of their 3-pointers (14-34), while the Warriors shot an uncharacteristic 22.9 percent from behind the arc (8-35). Boston's second unit also outscored Golden State's bench 68-32.