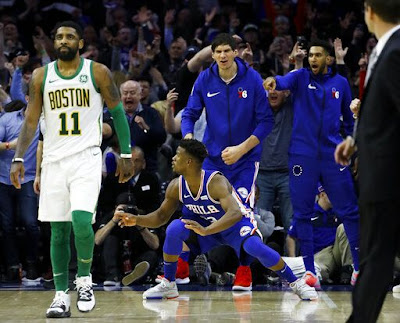 With hopes of competing for an NBA title, the Sixers have spent the entire regular season tweaking its roster.

Using the Celtics, Raptors and Bucks as its measuring stick, Philadelphia has revamped its personnel numerous times throughout the 2018-19 campaign. Three early-season losses against the Eastern Conference's upper echelon teams was enough proof for the Sixers to shake things up.

Philly pulled the trigger to acquire free agent-to-be Jimmy Butler, an All-Star scorer who had overstayed his welcome in Minnesota and was looking to latch onto a playoff-contending team, but most importantly -- gave the Sixers a closer. It's what they missed the most in their best-of-7 series against the Celtics last year, Philadelphia didn't have a scorer who they could rely on down the stretch who could put the ball on the floor and take matters into his own hands to close out opponents.

They have one now.

With a three-point lead in tact in the final seconds of the game, Butler initially lost the ball in an isolation move against Kyrie Irving but quickly recovered when he grabbed the basketball, took a side step to his left and drilled an 18-foot jump shot to seal a 118-115 win over the Celtics. Joel Embiid's monster double-double (37 points, 22 rebounds) put the Sixers in position and a 3-point play by Ben Simmons set the stage for Butler.

It was a prototypical win for Sixers, which gives Philly -- a team that dodged a regular season sweep by the hands of the Celtics -- a load of confidence heading into the postseason. The Sixers rely on its stellar lineup -- one that features two All-Stars, a perennial scorer in Butler and a sharp-shooting J.J. Redick.

Not even Kyrie Irving (36 points), who finished with 30-plus points in his fourth consecutive game, could overcome the Sixers' offense. He reached the 30-point mark before the final frame while Al Horford (22 points) and Terry Rozier (20 points) combined for 42 but couldn't come up with the necessary defensive stops to close out the home team.

Philly's starters combined for an absurd 110 points against the Celtics Wednesday night, including a combined 80 points from Emiid, Butler and Tobias Harris -- another scorer the Sixers dealt for prior to the trade deadline in an effort to outlast its conference's opponents in the playoffs.

Harris' 21 points certainly helped the Sixers come back from a 15-point deficit. For a guy who's a solidified 20-point scorer, Philly decided it was worth parting ways with its perimeter defender Wilson Chandler, future draft picks and first-round rookie Landry Shamet one week before the trade deadline.

The Sixers are all in for this season. They've traded away all of their assets for two expiring contracts (Butler, Harris) with the confidence that they have more than a legitimate shot at winning the east and competing for an NBA title.

Sixers: Despite shooting under 40 percent from the floor (37.8 percent), Philadelphia chipped away at a 15-point deficit by getting to the free-throw line -- where they drained 39-of-43 attempts. Embiid was responsible for more than half (20-of-21) while the Celtics were only 13-of-16 from the charity stripe, where Irving supplied 9-of-11.