Kyrie Irving on the Celtics homestretch: 'Everybody has to step up, but it starts with me' 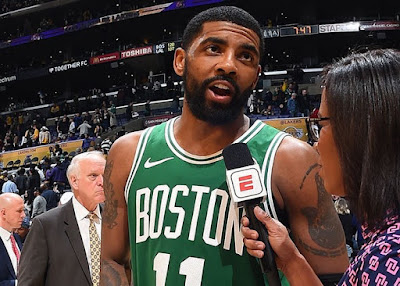 The Celtics have won three in a row after beating the Lakers 120-107 on Saturday night. It seems that the team is finally on the same page and their 1-5 start following the All-Star break is well in the rearview mirror.

So far on this current California road trip and win streak the team has shown focus, something that Kyrie Irving believes needs to continue for the homestretch of the regular season and into the playoffs.


"Everybody has to step up, but it starts with me," said Irving, who finished with 30 points, 7 rebounds and 5 assists against the Lakers. "It starts with my energy out there and my spirit. When everyone’s on the same page, we’re a different team. We weren’t doing that consistently throughout this season and now it’s more important than ever for us to have connectivity and be together and that’s where my focus is. That helps me play at a high level when all my teammates are playing at a high level."

Boston has finished with at least five-players scoring in double-figures (six in their last two), while averaging 32 assists per-game in their last three wins. When the Celtics spread the offense they way they have as of late, they are hard to beat which could potentially lead to a lengthy postseason.

Irving remaining relatively healthy has been huge as the Celtics make a final push with 15 games left in the regular season. Boston currently find themselves a half game behind the 76ers for the fourth best record in the East and 1.5 games back of the No. 3 seed. The All-Star is clearly just anxious to be back playing in the playoffs.


"The stuff that happens in the regular season, people barely remember it," said Irving. "When it comes to playoffs, that’s when you want to be playing your best basketball."

The Celtics will look to complete a four-game sweep of their road trip on Monday when they face the Clippers at Staples Center.