Kyrie Irving on confrontations with the media: 'I’ve made a lot of mistakes that I take full responsibility for' 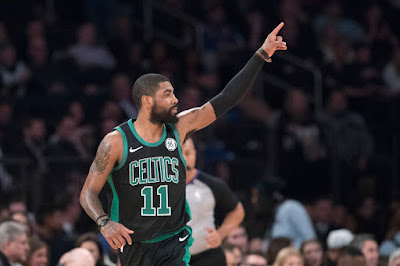 The Celtics wrapped up their four-game California road trip to go 3-1, which concluded with a blowout loss to the Clippers on Monday night.

During the team's three wins it was evident that there was more pep in everyone's step, especially in the locker room and during practice, a far cry of everyone's mood a week ago.

A six-hour plane ride mixed with some warm weather will apparently gel a team together in March, who are looking to compete for a championship come June.


"We just want to play well, said Kyrie Irving following the Celtics win over the Lakers. "Everybody has to step up. It starts with me and it starts with my energy and my spirit. When everyone is on the same page, we’re a different team."

Irving spoke with Yahoo Sports' Chris Haynes on Saturday night in Los Angeles, after the Celtics beat the Lakers, about his confrontations with the media this season and learning from his mistakes.


"The way I’ve handled things, it hasn’t been perfect," Irving told Yahoo Sports as he rested his feet in a bucket of ice at his locker stall. "I’ve made a lot of mistakes that I take full responsibility for. I apologize. I haven’t done it perfectly. I haven’t said the right things all the time. I don’t want to sit on a place like I’m on a pedestal from anybody. I’m a normal human being that makes mistakes. For me, I think because of how fixated I was on trying to prove other people wrong, I got into a lot of habits that were bad, like reading stuff and reacting emotionally. That’s just not who I am."

Over the past few weeks Irving has been very vocal on his stance when it comes to the media attention that at times he believes that he has nothing to do with.


"I mean, I get tired of this stuff just like everybody else," Irving said following a loss to the Rockets, prior to the Celtics road trip. "It’s a constant battle. Media has just gotten outrageous."

Despite being criticized last week for his reaction to having an ESPN camera follow him into the TD Garden, Irving acknowledges that he hasn't always handled his discontent with the media in a positive manner and he doesn't want those that look up to him to follow that example.


"Being one of the top guys in the league, this all comes with it," Irving told Yahoo Sports. "It’s a responsibility that I have to make sure that I know who I’m doing this for and know why I’m doing this. It’s for the players that are coming behind me who will be in this league and setting an example for them on how to handle things and how to evolve within your career."

After soaking his feet for about 15 minutes, Irving stepped out the bucket of ice, stood up and said, "I’m still learning, bro. I come from a suburb of New Jersey. I’m not used to all this [attention]."

When it comes to Irving's leadership on or off the court, it's no surprise how his Celtics teammates feel about the All-Star point guard, especially after the team's new found attitude and overall "good vibes" during this much needed road trip.


"Ask that man right there," Marcus Morris told Boston Globe's Gary Washburn when asked about the Celtics' resurgence, pointing out Irving. "His energy has just taken us to another level. He’s been great for us. Everybody been talking about how he want out and all this other shit, but he’s been great for us, a great leader."

Irving wants to get rid of any distractions in the locker room, as a leader who's been questioned repeatedly this season, the Celtics star accepts his role and all that comes with it. He says the first step was to abandon all social media platforms, while promising to not having anymore outburst towards those who cover the team or ask him questions.


"I just want to make sure this locker room understands who I am and what I represent," Irving told Yahoo Sports. "I’m trying to make sure that they set a great example for young players that are coming after them as well. Like I said, I haven’t said the right things and done all the right things, and I don’t ever want to compare myself to perfection. But I can tell that I’m definitely learning from the older players, the players that are my age and the younger players on how to deal with the evolution of just media. It’s a platform now, it’s an entire industry that bothers a lot of people, entertainers, athletes. Being at the click of a button and someone commenting on your life all the time and you’re seeing it. It doesn’t make you feel good when you’re feeding yourself that.

"And I had to get off of Instagram, I had to get off of Facebook, I had to get off of Twitter. I had to get off of those things to disconnect myself to focus on me, rather than getting information and validation from everyone else. So, once that started to progress, then I had a lot to fight back about. I was just sick of it after a while. I’m a human being who happens to be a hooper. This is the responsibility that I have. I’m done complaining about it. I have feelings about it, but I’m not going keep badgering the media, keep badgering other people, keep badgering this or that. It’s about moving forward and keeping my sanctuary as safe as possible. As long as I go out there and handle my business, I don’t have anything else to worry about. As long as I go out there and do my thing and make sure my teammates are playing well and their spirits are right, I’m doing my job."

The Celtics (41-27) are 1.5 games behind both the Pacers and Sixers for the third seed in the Eastern Conference. They return home on Thursday night to host the Sacramento Kings at TD Garden.