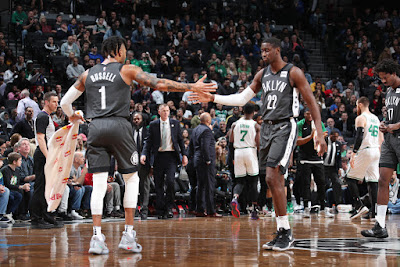 BROOKLYN -- Marcus Morris isn't worried about his team's recent struggles. Not even in the slightest.

After losing to the Nets by 14 points in a game where the Celtics trailed their opponent by double digits throughout the second half while trying to dig themselves out of a 19-point hole, Morris' confidence in his squad hasn't faltered. Much like his starting point guard, Kyrie Irving -- who had the night off -- Morris still has his eyes set on helping the Celtics secure the fourth seed and is very much ready to prove himself in the postseason.

His confidence is so high that he jokingly predicted that the ESPN documentary series, '30 For 30' will highlight the 2018-19 Celtics team a couple of years down the road.


"We've been having criticism all year, it can't be no worse than what it is now," Morris said after the Celtics' 110-96 loss. "Basically, we just tell ourselves keep going, man. Everybody is going to doubt us because of the year we had but when playoffs hit, it's basically a new season. We still have a chance at turning this thing around, we're excited, man. Probably two years from now, they'll do a '30 For 30' on this team."

In other words, 'look out'? With only five games left in the season, Celtics hope to pick up steam, grab home court advantage and get off to a quick start in the playoffs -- which is something we've seen them do before.

The 2017-18 Celtics didn't necessarily head into the playoffs blazing hot, something that's easy to forget when you think about the successful month that had. Although Celtics managed to put together an impressive six-game winning streak throughout the final two weeks of March, Boston followed that up by going 2-4 in its final six games and then turned it up a notch in the opening round of the postseason.

Coming from a guy who two months ago said he wasn't having fun and didn't think his team could flip the proverbial switch, Morris' confidence is certainly a good sign. Gordon Hayward scoring a team-high 19 points on 7-of-12 attempts while Morris led the starting unit with 16 points are also good signs as well.

However, Brad Stevens wasn't necessarily as light-hearted as Morris. The dreadful third quarter reared its ugly head once again as D'Angelo Russell netted 20 of his 29 points and led a 25-9 Nets run before Stevens immediately called an early-quarter timeout.


"I was really frustrated," Stevens said. "I didn't think we valued possessions at the level we need to to be a good team. That's what I just talked about (in the locker room) and I get it. We played really hard last night. Last night was a tough game but every possession all year matters. We haven't been great at that and that's one of the things if we're going to make it anywhere significant, they've all got to matter equally -- offensively and defensively."

While giving the Nets plenty of credit for their effort on both ends of the floor, Stevens also reminded reporters of Friday's challenging first leg of the Celtics' back-to-back set but that's where the excuses end for his team. From here on out, Stevens is expecting to see his team take things to another level throughout its final five games of the year.


"Everybody's going to go through stretches where it's not going as well," Stevens explained. "There are nights where you're sick, there are nights where you don't feel as good. We're done with back-to-backs, we got some significant travel but at the end of the day there's no reason for everyone to not be fresh and ready to roll from here on out. So I'm excited to see if we can make some progress."