Celtics Injury Report vs the Spurs 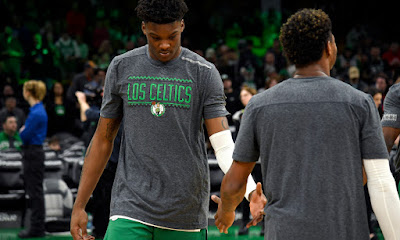 Celtics are 43-30 and have the fifth best record in the Eastern Conference, with nine games remaining in the regular season.

After losing to the Hornets on the road 124-117, where they blew an 18-point lead in the fourth quarter, the Celtics were short-handed to begin with before Robert Williams III, who made his first NBA career-start, fell awkwardly while attempting a put-back dunk late in the second quarter.

The rookie, got up on his own after several minutes and did not return, as the team called his injury a lower back contusion and will not play tonight when the Celtics host the Spurs at TD Garden on a second night of a back-to-back.

Al Horford is also out of the lineup for Brad Stevens, after missing Saturday night's loss in
Charlotte for rest, the Celtics big man has left knee soreness from a previous injury earlier in the season.

Jayson Tatum suffered a similar fall to his teammate Williams, but it didn't seem as bad against the Hornets. The Celtics are also calling it a lower back contusion and he has been downgraded from doubtful to out against San Antonio.

Aron Baynes' left ankle injury not as severe as it was initially reported during the Celtics loss to the Sixers last Wednesday night, while Gordon Hayward (concussion protocol) have both been upgraded from questionable to available for Stevens against the Spurs.

The Celtics have officially announced that they have brought back Greg Monroe on a 10-day contract to help out their frontcourt, who is also available tonight.