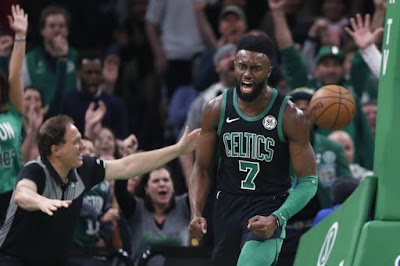 The Celtics are 1-5 since the All-Star break and are about to begin a four-game road trip in California, which three of the four teams they will face has already beaten them this season.

After their 115-104 loss to Houston on a national televised stage, the Celtics find themselves once again in front of the same crowd, this time against the NBA champion Golden State Warriors and with an opportunity to pick up a huge win with a month left in the regular season.

At 38-26, the Celtics currently have the fifth best record in the Eastern Conference and one of the few bright spots as of late has been the play of reserve Jaylen Brown.

The third-year wing has been making his case to return into the starting lineup and if the Celtics want to enter the postseason on a high-note Brown believes the atmosphere around the locker room has to change.


"To be honest, I’m not feeling good at all," Brown said Monday to Boston Globe's Gary Washburn. "The losing, it’s not a good feeling. I’m not too good about that. Because right now it’s not good. It’s toxic. I can’t really point out one thing. I don’t have all the answers. I’m just going to try to be part of the change. I’m going to try to do my best. That’s all I’ve got to say."

Brown has been the Celtics only consistent double-figure scorer off the bench, despite the team's current bad stretch. He single-handedly nearly led a comeback against the Rockets on Sunday when he finished with 15 points and 6 rebounds in 28 minutes. For Boston to make a successful run, Brown will have to continue to play at a high level on both ends of the floor.