Kyrie Irving on the media: 'I get tired of this stuff just like everybody else, it’s a constant battle' 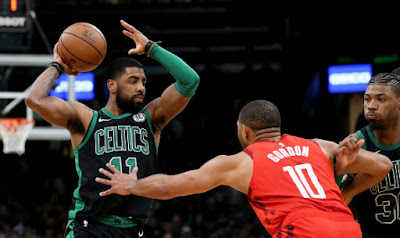 Kyrie Irving was not in the best of moods on Sunday, especially following the Celtics 115-104 loss to the Rockets at TD Garden.

That was even more evident immediately during his post-game presser when the All-Star point guard didn't have much to say, using short one-worded answers to questions asked by local and national media members before walking-off 90 seconds later.

The Celtics (38-26) have loss five of their last six and are on the road in California to begin a four-game road trip. First stop, a date with the Golden State Warriors. Call it what you want, the calm before the storm or maybe even just waiting for the inevitable when it comes to facing the NBA champions on Tuesday night, but Kyrie Irving seemed like he was in better spirits after practice.

Perhaps it was the six hour flight across the country to San Francisco that had the star guard with a different demeanor, as Irving spoke about his comments or lack there of after the Celtics-Rockets game.


"I mean, I get tired of this stuff just like everybody else," Irving said to NBC Sports Boston's A. Sherrod Blakely. "It’s a constant battle. Media has just gotten outrageous."

Irving brought up a recent report that questioned some of the league's top players, including himself, his buddy and ex-teammate LeBron James and two-time Finals MVP Kevin Durant.


"Whether call it fair or unfair, no one should question what type of winner those guys are," Irving said on Monday after practice. "No one wants it to be solely about them, but we take most of the responsibility and so does the head coach. So, when you have that and you have relationships to build with that, being traded last year, coming into this...it’s a lot of new for our team. And we’re still building for something. It gets to that point. It gets to that point; I’m normal."

Even before Sunday's loss to the Rockets, Irving seemed annoyed walking into the arena when you clearly hear him say with ESPN cameras following him, prior to the nationally televised broadcast, "I'm not gonna miss any of this shit when I'm done playing."


Irving explained his choice words ahead of Sunday's matinee, that seemed to be a surprise considering he's been on a national stage quite often during his seven-plus years in the NBA.


"I didn't really come into this game to have cameras in my face, be famous, be a celebrity, whatever embodies that," Irving said. "It's a little hard for me. I wanted those things when I was younger, but now ... I just want to play basketball at a very high level."

The Celtics star seems to believe there should be a fine line between being an elite player that gets critiqued solely on just their performance and nothing else.


"Coming to work every day and doing my job at a high level, and putting on a show for people," Irving said. "I’m an entertainer out there, but I’m a winner first and foremost. When I used to be in my backyard playing one-on-one with my dad, that was instilled in me, that winning mentality. When he taught me how to be on a team, that’s what he taught me.

Irving added, "It’s part of growing in this business and finding a balance between your working environment and your personal life."

Since asking to be traded out of a situation where he wouldn't be questioned so much about what he was thinking or how to be a leader in Cleveland, Irving finds himself be the center of attention on a daily basis. Due to the high expectations the Celtics had entering this season, most look to Irving for answers whether he has them or not.


"My body of work coming up to eight years is set in stone," Irving said. "When you come into a situation where you’re heading into free agency, you have to answer every single question about the team, answer about the mood, the attitude… I got away with doing that for so many years; being angry and not being questioned about it or anything like that. It gets overwhelming at times.

He added, "You have high expectations. You want it all right now and you have a particular level that I’ve been at since I was a kid.  I was blessed with a lot of talent, and to be able to share that, that would be beneficial to the group rather than, I have to compete with everyone to be the best. Like, nah, I am. It's not that component. It’s like what is going to drive this team? What am I gonna do to get the best out of my teammates? It’s an evolving job every single day."

Clearly this is was one of Irving's better moments in amidst of an inconsistent season for the Celtics so far. But, how long will it be before he's making headlines again on what he said or didn't say?