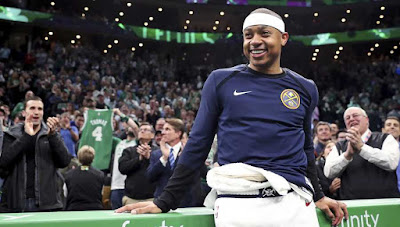 The former Celtic was honored at TD Garden for his time in green-and-white with highlights of his best performances, his time spent giving back to the community and received a standing ovation by the fans during the first timeout of the Celtics' 114-105 loss against the Nuggets.


"That was big, that was special," Thomas said after the game. "I wish my family was here to see that but they watched. I was emotional, I almost cried. That was everything, I appreciate them for doing that, it meant a lot."

The win over the Celtics also meant a lot for the Nuggets. Denver officially clinched the playoffs and are currently tied with the Warriors for the best record in the Western Conference.

They also schooled the Celtics in the final frame with a lesson on how to close out an opponent, outscoring Boston 34-25. For the Nuggets, it came down to their defense against the Celtics -- which forced turnovers, ill-advised 3-pointers and transition buckets.

The Celtics also did themselves in by making crucial mistakes in the final two minutes of the game. After Kyrie Irving's 3-pointer pulled the Celtics to within five points (106-101), Marcus Morris committed a costly shooting foul on Paul Milsap, who converted a four-point play and eventually did the Celtics in for good.

Not even Irving's 30 points or Al Horford's 20 could save the Celtics down the stretch as seven Nuggets players scored in double figures, including Nikola Jokic, who flirted with a triple-double (21 points, 13 rebounds, 7 assists) to go with three blocks and a pair of steals.

When the defense bucked down, the Celtics panicked and resorted to chucking up treys from behind the arc and committed crucial turnovers that shifted the momentum into Denver's hands. If Boston plans on making a deep playoff run, they're going to have to learn how to settle down against teams that can string together defensive stops when they matter most.

Boston tends to struggle with converting jump shots, rushing the offense and settle for contested outside looks. It's what panned out throughout the fourth quarter against the Nuggets and it could happen again against teams like the Sixers and Spurs -- two of the following next three games on the schedule.

As for Thomas, who was demoted to being out of the Nuggets' rotation just last week, he earned playing time following his own tribute in the first quarter. Thomas finished 0-for-2 from the floor and a pair of assists in just under seven minutes.

Still, no one will forget what he meant to the Celtics as the heart and soul of a team that overachieved in 2017 when Thomas put the squad on his back and led it to the Eastern Conference Finals. Averaging 28.9 points throughout a regular season where he finished as an MVP candidate and a fourth-quarter assasin before playing some of the most inspired basketball the league has seen in quite some time, Thomas etched his name in Celtics history.

A 53-point performance on the birthday of his late sister, who passed a day before the start of the playoffs? A legendary performance.

Sure, the Nuggets put together a much-needed win Monday night, but Thomas' favorite part of the evening had to be when he watched TD Garden shower him with love and appreciation for all the hard work he put in as a member of the Celtics.


"Well-deserved, ten times over," Stevens said. "I can't say enough great things for Isaiah. I could be up here all night and certainly that video tribute was great. Our people did a great job on it, it was very -- it was emotional and it was -- it could've lasted a lot longer. So, greatly appreciate of our time together and it was -- I was glad that he got that moment."

For the first time in almost two years, Thomas played basketball at TD Garden. It had been a while since he took the parquet as a member of the opposing team and when he was asked about the possibility of rejoining the Celtics, Thomas was open to the idea of one day returning to Boston on a new deal as a free agent this upcoming summer.


"I mean, why not?" Thomas asked. "If the opportunity presents itself, that would be everything. I'm a nugget right now and I'm happy to be here. The Nuggets organization took me with open arms, given me an opportunity, given me a chance to work my way back on my time, I can't thank them enough. But if that opportunity is there I'm open to anything."

In the meantime, the Celtics will have another shot at knocking off a top team when they take on the Sixers Wednesday night in Philadelphia. With playoff implications on the line, Boston will have a chance to sweep the season series against a team they'll most likely see in the postseason this spring -- a good challenge for a team gaining momentum during the tail-end of the regular season.

Nuggets: Crushed the Celtics on the glass -- where they out-rebounded Boston, 51-37. Denver also shot 48.9 percent from the floor and finished with 46 points in the paint. Its front court of Jokic, Will Barton (20 points) and Paul Millsap (12 points) combined for 53 points on 22-of-38 from the field.