Clippers 140, Celtics 115: How will Boston respond from blowout loss? 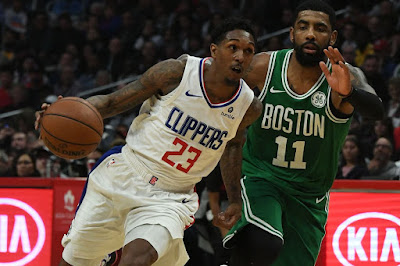 Now is the time to see what the Celtics are truly made of.

The short-lived California winning streak was fun while it lasted prior to Monday night's game against the Clippers. However, Los Angeles had its own streak to take care of, along with playoff implications as they stretched its winning streak to five straight and attempt to hold onto the seventh seed in the Western Conference.

With a track record of losing in bunches this season, it'll be interesting to see how the Celtics bounce back. In November, a loss to the Jazz at TD Garden triggered four out of five losses. Even after an eight-game winning streak (longest one of the season) in December, one loss led to three straight, a four-game winning streak in January led to a three-game skid on the road and the four losses in a row following the All-Star break set the stage for the California winning streak.

If the trip to Cali truly was the turning point of the 2018-19 campaign, the losing pattern we've seen throughout the course of the regular season should be snapped Thursday night against the Kings at TD Garden. Sacramento, a team that nearly forced overtime last Wednesday, were a tough out for the Celtics as Gordon Hayward's game-winning jump shot was the difference at the end of the final frame.

Monday night, the Celtics didn't deliver that same intensity on the defensive end of the floor. They failed to protect the paint -- where the Clippers scored 68 points -- allowed Lou Williams to cook the defense for 34 points on 14-of-20 from the floor en route to a 140-115 victory.

140 is the most points Boston has allowed all year long. Monday night was also, fittingly, a historic night for Williams, who became the NBA's all-time leader in total points scored off the bench (11,148).

Meanwhile, the Celtics found their offense in spurts throughout the second half but couldn't stop the bleeding that turned into a 78-66 second half, following a 13-point hole (62-49) at the break. Terry Rozier scored a team-high 26 points off the bench, Jaylen brown added 22 points on 9-of-13 from the field, including 3-of-5 from deep and Kyrie Irving finished with a double-double (18 points, 11 assists).

Boston certainly looked like a team at the tail-end of a long road trip, however, for a team that appeared to be on the verge of a colossal collapse, the west coast swing, overall, was a success. If someone told you moments after Sunday's blowout loss to the Rockets that the Celtics were going to conclude their four-game road trip -- one that included the champion Warriors -- 3-1, you'd consider that a blessing for a team that, at the time, hadn't pieced together a win since February 13.

For a team with championship aspirations and searching for consistency, how they recover from a blowout loss this late in the season will dictate their team's momentum between now and the beginning of the post season.


"We really played with a purpose, we want to continue playing that same way, now that we're going back home" Al Horford said about the three-game winning streak. "It's important because we just need to continue to find more consistency as a group and I feel like we did a lot of that this trip."

With 14 games left in the regular season, the Celtics must leave old habits behind if they plan on truly turning the page on what's been a roller-coaster year. Trading winning streaks for losing streaks isn't going to grant Boston any momentum heading into the spring.

Six of the final 14 games are against playoff teams, half of them will be played at TD Garden -- which gives the Celtics a legitimate chance at finishing the season strong before gearing up for a potentially deep post season run.

Clippers: Los Angles' offense was sizzling, by the temperature of 61.6 percent from the floor, despite committing 19 turnovers. They also converted 10 offensive rebounds to 17 second-chance points. The Celtics allowed 140 points in a regulation game for the first since 1994 against the Washington Bullets.