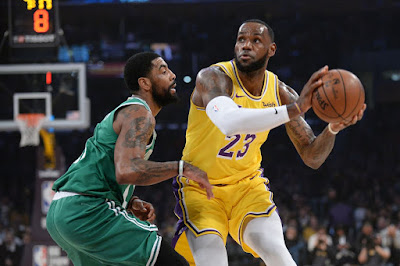 The Celtics haven't been the same team since last Sunday's plane ride to California. The infamous commute has all of a sudden changed the team's attitude, focus and has forced them to re-commit to winning basketball.

Although it essentially takes all of Brad Stevens' guys to be on the same page in order to be successful in the long-run, Kyrie Irving has received all of the praise for Boston's recent turnaround.

Guys like Al Horford, Jayson Tatum and Gordon Hayward have pointed to their All-Star point guard as the biggest reason why the Celtics are on the up-and-up since heading to the west coast, and when the topic was brought up to Marcus Morris after the Celtics' 120-107 win over the Lakers Saturday night in Los Angeles, he too sang Irving's praises.

What exactly happened on that flight?

According to Jay King of The Athletic, card games, enthusiastic chatter and jamming out to music was the fix the Celtics needed. It's what led to a 33-point Warriors slaughter, a down-to-the-wire win over the Kings and a 13-point cakewalk victory against the Lakers. After looking like a team -- losers of five of its last six -- that was imploding and a few losses away from hitting rock bottom, the Celtics are on the verge of sweeping their four-game road trip and Horford confirms it all started because Irving took the initiative of sparking conversations with his teammates on their way to Cali.


"It's a long flight across the country, everybody's getting their headphones on or whatever," Horford said. "And (Irving) just started talking and then he was like, 'Hey, let's play cards.' And we just got to talking. I just think that his energy in all that, that kind of brought us together as a group. And that carried over that practice the next day in San Francisco, which I thought was a really good one, and then that shootaround before the game was really good as well, really focused. But it all started with that plane ride." [The Athletic]

Improvements have been made on both ends of the floor. On one end, the Celtics offense has looked better than it has all year long -- they're averaging 119.6 points while shooting over 50 percent from the floor and finished with at least 26 assists in each of their last three games. Defensively, the Celtics are ending quarters strong, taking care of leads and have only allowed 103.6 points per contest.

Irving has a lot to do with the newfound level of focus from the Celtics and it's not just because of his poker face or taste in music; that's not what has his teammates buying in to their respective roles. Boston is refocused because of Irving's attitude and approach to the game.

The games of seeing Irving not give it 100 percent on defense, going through the motions while calling for pays on offense and choosing when to embrace his teammates for their hard work and effort are a thing of the past. He got the ball rolling during the flight to California by just bonding with his team, but most importantly he's showing it on the basketball court.

The season-changing flight wasn't necessarily about finding out what was bothering his teammates or trying to figure out how Boston got to where they were one week ago in the first place, but rather a time to just enjoy each other's company and let everything else fall into place. Irving also spoke to coach Stevens a couple of times before Tuesday's matchup against the Warriors -- which could be another big reason why Irving has flipped a switch as a leader and helped turn things around for his team.

Irving's 30 points, 7 rebounds and 5 assists led the Celtics -- he was one of six Celtics players to score in double figures -- while his former teammate LeBron James added another trip-double to his resume (30 points, 12 assists, 10 rebounds). His play on the court, much like the change in his attitude, certainly deserves proper recognition but let's not forget what we saw after the All-Star break.

We saw a much more reserved Irving; a leader who seemed fed up, disconnected and a player who was seemingly ready to coast by the rest of the regular season and rush to the playoffs for the games that matter and are really fun for him. A few consecutive losses could bring out the old Irving, maybe, maybe not, but either way, let's not get too ahead of ourselves in crowning Irving for what he was supposed to be doing all along.

Lets let the rest of the regular season play itself out and see where the team is at when the season is all done. Only then will we know where this year's Celtics team stands alongside the rest of the Eastern Conference.

Boston will look to go 4-0 on its four-game road trip when they take on the Clippers Monday night in Los Angeles.

Celtics: After another efficient night for Gordon Hayward, who led the second unit with 15 points, is now averaging 19 points while shooting 70.5 percent from the floor on this road trip so far.