Celtics to receive the Clippers 2019 first round pick 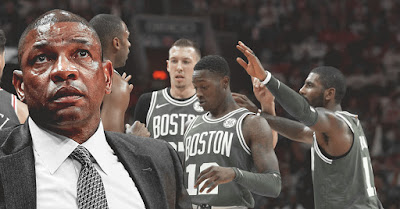 It's been a good week so far for the Celtics, who clinched a postseason berth for the fifth straight season (out of six) under Brad Stevens, after a win over the Cavaliers, combined with a Pistons loss to the Nuggets on Tuesday night.

While the Los Angeles Clippers also clinched a playoff spot out West, which means the Celtics get an extra draft pick this summer. Danny Ainge's treasure chest of potential trade assets got richer thanks to Doc Rivers leading his team to the NBA playoffs, meaning their 2019 first round draft pick, via the Memphis Grizzlies, gets conveyed to Boston in June.

Bare with me now, as the breakdown of this pick has quite a history attached to it that also involves Ainge as well. The draft pick was originally acquired by the Grizzlies along with Lance Stephenson for veteran forward Jeff Green at the 2016 trade deadline. Ironically enough, Green was traded by the Celtics to the Grizzlies in January of 2015 for a separate 2019 draft pick (or later) that Boston is to receive from Memphis at some point.

Are we confused yet?

The Clippers pick (acquired for Green) was traded by the Grizzlies at the 2016 NBA Draft to the Celtics. That night Ainge made eight selections during the draft: Jaylen Brown, Guerschon Yabusele and Ante Zizic in the first round; Deyonta Davis, Rade Zagorac, Demetrius Jackson, Ben Bentil and Abdel Nader in the second round. Boston traded the draft rights to Davis and Zagorac to Memphis in exchange for this pick that is now heading to the Celtics as a first round choice in this year's draft.

This pick now gives the Celtics at the very least three first round pick in the 2019 NBA Draft:

Aside from their own pick, the Clippers pick (via Memphis) and either the Sacramento Kings or the Philadelphia 76ers pick (if the Kings win the No. 1 overall pick at the Draft Lottery, Boston receives the Sixers' pick instead).

Both the Kings and Grizzlies are lottery bond as they respectively rebuild their franchises and it should benefit the Celtics if they're looking to include such picks for another potential superstar from let's say, maybe New Orleans, possibly?

I'm just thinking out loud, but you never know what 'Trader Danny' has up his sleeves with the plethora of draft picks for the future.