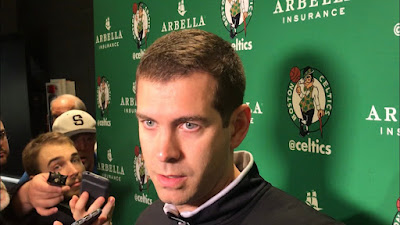 Head coach Brad Stevens was asked about the team officials' statement regarding an incident where Warriors center DeMarcus Cousins was called a racial slur by young Celtics fan TD Garden back in January.

Stevens admitted prior to Friday's night tip-off against the Pacers, that he was aware that there was an exchange made between Cousins and a fan but didn't know the extent of it until Thursday evening, when Yahoo Sports' Chris Haynes broke the story.


"This is one particular fan," Stevens said. "I heard that night that something had been said and I knew that everybody in charge here was taking it very seriously. I had not heard the results of that investigation or the decision until last night when it became public news and then talked a little more to our people with the Celtics this morning. Listen, it's disappointing anything there's a negative fan interaction. Most of fan interaction that I've been a part of is -- what I would say is 99 percent of it is just good nature ripping back and forth.

"But there's no doubt that this isn't the first time that a fan has crossed the line. It's not the only time this year, obviously in the NBA and those are disappointing things. Hopefully, it's reminder for everybody here and everywhere else -- cheer for your team, cheer loudly, enjoy it and hopefully appreciate the guys on both sides."

Stevens was “disappointed” when he found out what was said to Cousins back in January pic.twitter.com/Yox94Zjr76
— Josue Pavón (@Joe_Sway) March 29, 2019