Update: Jayson Tatum (shoulder) expected to return against the Kings 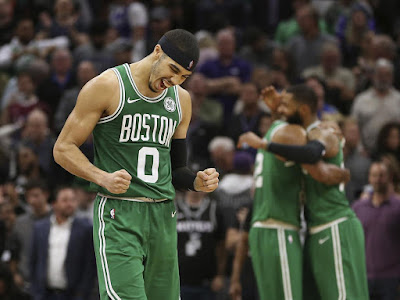 Jayson Tatum is expected to return against the Kings after sitting out in the Celtics loss to the Clippers on Monday night. The forward didn't suit up due to a right sore shoulder that stemmed from the team's blowout win over the Golden State Warriors.

#NEBHInjuryReport for tomorrow vs. Sacramento:


The Celtics are coming off a successful 3-1 California road trip, while Tatum celebrated his 21st birthday over the weekend in Los Angeles with his family and teammates.

Tatum and Kyrie Irving both made an appearance on The Players' Tribune Knuckle Heads Podcast, with Quentin Richardson and Darius Miles in L.A.. While Irving has vowed to abandon all social media platforms and not have anymore outburst towards the writers, it didn't stop the Celtics All-Star from motivating his teammate and former Duke standout Tatum with the NBA playoffs a few weeks away.


“I tell Jay, ‘Me and you in this, we’re going for the guts and the glory. When it’s all on the line, I know I need you right next to me. So, let's get this thing going.'”

Irving also reminded Tatum how special it is to be drafted by the likes of an historic franchise that is the Boston Celtics.

Despite Irving being the subject of criticism for his gripe with the media and role as a leader, the star point guard has apologized and pledged to set better examples for the younger generations to follow.

Irving's motivational message to his teammate Tatum, who led the Celtics to Game 7 of the Eastern Conference Finals last year, is a great start.

Tatum is averaging 16.1 points, 6.2 rebounds and 2 assists on 45.2 percent shooting from the field and 36.8 percent from behind the arc in 31 minutes per game this season.