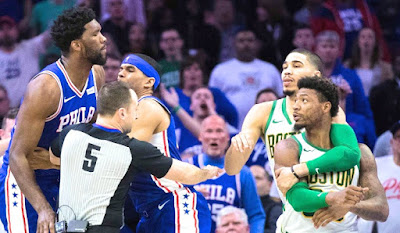 Philadelphia chipped away at a 15-point deficit in the second half of a 118-115 win over the Celtics when the momentum shifted in the third quarter, following an altercation between Smart and Sixers big man Joel Embiid. Smart was eventually ejected from the game when Embiid's screen tripped up Smart and led to the Celtics guard to get up from the floor and shove Embiid from behind to the ground.

The two were immediately separated from each other but Smart earned himself a double-technical foul and it eventually led to the Raptors finding their rhythm in the second half to erase their deficit and pull ahead at the end of the fourth quarter. When the subject was brought up to Celtics head coach Brad Stevens, he didn't hold back in expressing his frustration with Smart's decision to attack Embiid.


"I'm disappointed in Marcus," Stevens said. "Like, we need you. Baynes is already out. We need him to be in the game. No matter what happens, we need that to happen. I already said it in the locker room but especially, again, with Baynes out, we needed him out there."

Stevens' point is a valid one, considering what Smart means to the Celtics' defense. Baynes suffered a left ankle injury that will most likely keep him out until the postseason, meaning the Celtics were all of a sudden vulnerable in the front and back court in the midst of a Sixers comeback that eventually earned Philly its first win against the Celtics since Game 4 of last year's Eastern Conference semifinals.

Stevens almost immediately backed off of his comments when he reminded reporters that Smart's passion and intensity is still invaluable for the Celtics, despite the ejection.


"Don't get it wrong, we love all that Marcus (Smart) is," Stevens explained. "And part of Marcus is his fire. As you know, a time or two a year, it gets the best of him but this is just a reminder of how important he is. He knows how we all feel and he knows we all love him. That's just part of it, it's part of a long season."

Behind an inspired Embiid, the Sixers proceeded to outscore the Celtics by 14 points in the second half. Ben Simmons broke a tie game in the final minute of regulation with a three-point play before Jimmy Butler sealed the win down the stretch after Kyrie Irving forced a loose ball that resulted in an open look for Butler when he recovered and drained a nail-in-the-coffin jumper.


"He took responsibility for it," Irving said when he was asked about Smart. "He knows how much of a big piece he is for us. We need him out there in terms of his smarts and him being out there, being aggressive on the defensive end as well as Baynes going down battling with Joel, that was big parts of the game. We don't want to make any excuses, those things can't happen in terms of Smartie being ejected, especially when we're in an environment like this.

"But we talked about it, we squashed it and now we move on."

Celtics will move onto Charlotte Saturday night when they take on the Hornets.