Gordon Hayward on his struggles this season: 'It's embarrassing' 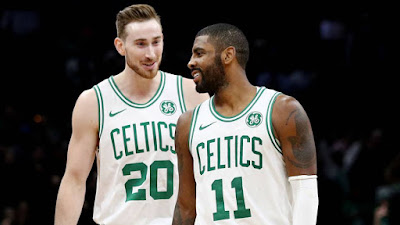 The Celtics are fully healthy for the first time since the beginning of the 2018-19 campaign, which was not the case just a season ago. Looking at this current roster, one would ask shouldn't this fully loaded, talented team be better than their 38-26 record?

The return of Kyrie Irving from knee surgery and Gordon Hayward from a gruesome ankle injury to this same Celtics team, who made it to Game 7 of the Eastern Conference Finals last year without both stars, it was a no brainer to anoint them the squad to beat in the East coming into this season.

But so far that hasn't been the case, while players have blamed the media and each other for much of the drama and the team's attitude, especially as of late, the Celtics struggles can't exactly be pinpointed to where it all began.

ESPN's Jackie MacMullan caught up with Gordon Hayward to get his perspective as he continues to regain his All-Star level form during an inconsistent season in Boston up to this point.


"I was thinking, 'Wow, am I really that slow out there? It's hard. It's embarrassing," said Hayward. "You want to be the guy that says, 'I'm strong. I don't need any help.'"

It's been hard to bond with his teammates this season because he was away for such a long period of time during his first year in Boston, while recovering from a broken ankle.


"One of the hardest things about last year was going through the whole injury kind of alone," Hayward said. "It wasn't necessarily anyone's fault. I had just moved to a new team and was just starting to try and develop relationships with these guys. Then I got hurt, and I was away from the team, and you don't have a chance to put a foundation down."

Though Hayward was demoted to a reserve after just 20 games, that hasn't been the most difficult part since returning to the Celtics lineup this season.


"The most frustrating part is that I'm constantly being asked if I'm 'back.'

"Back to what? Because the situation is completely different now," said Hayward.

In his last year in Utah and lone All-Star season, Hayward averaged 21.9 points, 5.4 rebounds and 3.5 assists per game. He was the Jazz's No. 1 go-to-scorer, putting up nearly 16 shots, shooting over 40 percent from beyond the arc and getting to the free-throw line more than six times a night.

This season, because of a new role and the lack of confidence in his body, Hayward hasn't been as aggressive going into the paint, he’s only getting to the charity strip 2.4 times, while averaging 10.7 points, 4.4 rebounds and 3.5 assists a game.

One example of a dysfunctional moment this season came during a road loss in Orlando back in January, the Celtics trailing by two points to the Magic with 10 seconds left. On an inbound play out of a Brad Stevens' timeout, Hayward decided to pass the ball to Jayson Tatum who missed a midrange jumper from the corner as time expired. Kyrie Irving was visibly upset with Hayward on the court immediate after the shot, but later that night, the Celtics guard called to apologize to his teammate.

"It didn't really bother me. Kyrie called me later that night and apologized. I knew it was in the moment."

Though Hayward has had a couple of 30-point outputs earlier this season, both against the Minnesota Timberwolves, the Celtics forward was trending upward in the month of February (averaging 14.5 points and 4 rebounds) prior to the All-Star break. It was during the time off that he injured his other non-surgically repaired ankle playing one-on-one with teammate Semi Ojeleye.

Since his return from that sprained ankle, Hayward has reverted back to some old habits while only scoring 5.2 points in the Celtics' last five games.


"I can't worry about numbers," he said. "I've got to focus on winning plays."

However, Hayward does still feel pain and have soreness from his repaired ankle, nothing some ice and Ibuprofen can't fix for now.

As for the Celtics salvaging their season, there isn't anyone going through more trials and tribulations this year on a daily basis than Hayward as he continues to help his team succeed.


"It's complicated," Marcus Smart added. "You can't stop playing him, but at the same time, you don't want to lose the other guys who are playing well. Guys need to earn their minutes. Gordon understands that. We want Gordon to be Gordon. We need that confident guy." [ESPN]