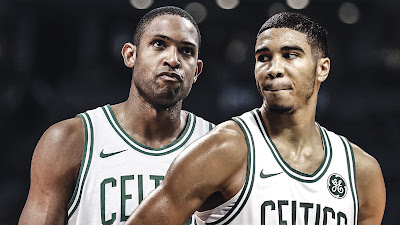 The Celtics will get some much needed help on Tuesday night in Cleveland.

Forwards Jayson Tatum (lower back contusion) and Al Horford (left knee) were listed from "questionable-to-probable" and now they'll both be "available" for when the Celtics take on the Cavaliers tonight.


Tatum suffered the back injury during the Celtics loss to the Hornets on Saturday night that forced him to miss Sunday's blowout to the Spurs at the TD Garden.

Both Horford and Tatum were listed as "questionable" for tonight's game on Monday when the Celtics put out yet another lengthy injury report.


#NEBHInjuryReport for tomorrow vs Cleveland:


Last week Brad Stevens said he had plans to hold Horford out for "three or four games" before the end of the regular season, but with Kyrie Irving out vs the Cavs and the Celtics on a four game losing streak, it looks like Horford wants to do all he can to help his team win.

The Celtics (43-31) are currently two games behind the Indiana Pacers for the fourth seed in the East, with eight games remaining, as they look to push for home-court advantage in the first round.