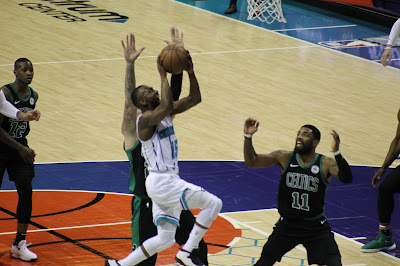 "We are in an evolution phase: Who's reliable?"


Brad Stevens told Brian Scalabrine prior to tip-off in Charlotte, in a game where rookie Robert Williams got the nod to start for the Celtics for a team that played without Al Horford and big man Aron Baynes in the front court. Williams had a decent game; he scored two points, finished with a pair of blocked shots and pulled down three rebounds in nine minutes before suffering a back injury in the second quarter that ended his night.

Kyrie Irving (31 points, 7 rebounds, 6 assists), easily Stevens' most reliable player, delivered another 30-plus point game -- his sixth in the past seven outings, Jaylen Brown went off for 29 points on 10-of-13 from the floor and Marcus Morris finished with 15 points, including a trio of 3-pointers. All three came up big for Stevens and the Celtics but Kemba Walker's late-game heroics carried the Hornets in the final frame.

Walker scored 12 points in the final three minutes, he led the Hornets throughout their absurd 30-5 fourth-quarter run that eventually turned into a 124-117 win over the Celtics in Charlotte. It's Boston's third straight loss, their fourth in six tries.

For a team desperately striving to find some momentum before the postseason, the Celtics missed a golden opportunity to put together a win. Boston blew an 18-point lead, not the first time we've seen such a thing and at this point in the season it makes you wonder when will this team fix the underlining issue of collapsing in the second half.


"This game was over in the beginning of the fourth quarter," Irving told reporters after the game. "We took our foot off the gas pedal, got to a five-point game. Momentum shifted from there."

It was the best explanation Irving could come up with. Looking visibly upset, he couldn't hide his frustration towards the end of the night when Terry Rozier decided to take matters into his own hands by pushing the ball towards the rim before he ran back and chucked up a 3-pointer with plenty of time left on the shot clock to tie the game and was at a loss for words when he addressed the media.

Rozier's attempted bounced off the front of the rim with 14.3 seconds left. It was a boneheaded move by the back up point guard but his coach didn't blame Rozier for the ill-advised attempt.


"They're face-guarding Kyrie at half court, being able to drive the ball and get into the paint -- which he did and the (he) circled back," Stevens said. "At the end of the day that should not be on Terry, if anything, that should be on me. I don't blame him for that. He attacked, the clock was running down, we're down three. We've seen him hit shots like that. But at the same time, if there's a finger to point, it would be at me because we had a timeout left."

Reporters circled back to Stevens' pregame question about who on his team is reliable. Who can he trust after a game like this?

At this point, it's difficult for Stevens to declare which players he can rely on night in and night out. Besides Irving, Morris and Brown each bounced back from lackluster performances but it wasn't enough down the stretch and Jayson Tatum's shooting woes continued Saturday (5-of-17) while this team struggles to find consistency.

The Celtics don't have a lot of time to correct those fourth-quarter mistakes as they head back home and host the Spurs on the second night of a back-to-back set come Sunday at TD Garden.

Boston went on a 22-5 run to lead by 18-points with eight minutes left in the fourth quarter, before the Hornets closed the game on a 30-5 run to win by seven. Despite the Celtics finishing with 31 assists on 44 made baskets, they had only four in the final frame, including one during Charlotte's run, where Boston shot 2-20 from the field.