Kyrie Irving says the Celtics have found 'joy' on road trip, will play vs Lakers 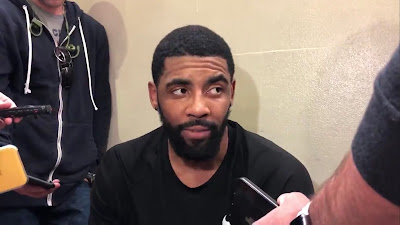 Kyrie Irving (left thigh contusion) will make his return against the Lakers, after sitting out in the Celtics win over the Kings Wednesday night.


#NEBHInjuryReport Kyrie Irving is “fine,” according to Brad Stevens, and he’s ready to roll tomorrow night against the Lakers.
— Boston Celtics (@celtics) March 8, 2019


Irving spoke to the media following practice on Friday about being ready to play against the Lakers and what Celtics have found after going 2-0 on their current four-game California road trip.


"Joy," responded Irving immediately. "Just having fun playing basketball and competing for one another."

The Celtics All-Star was asked if it's difficult to block out all the hype surrounding playing against  the Lakers and his former teammate LeBron James, considering all the media turmoil both players have endured this season.


"It’s pretty easy," Irving said. "It’s not hard. It’s not hard at all. It’s just another game but going against a great competitor, a teammate like ‘Bron is always fun. You just understand that these head-to-head matchups probably will happen for a few more years…. you just want to take advantage of them. Just the great players you get a chance to play against in our league, you always want to play well."


The Lakers at 30-35, find themselves 6.5 games out of the eighth and final playoff spot out West, despite already getting a huge win over the Celtics on a Rajon Rondo buzzer beater a month ago, Los Angeles has gone 2-8 since.

With rumored reports that the Lakers will limit James' minutes going forward and news that Brandon Ingram will miss the remainder of the season due to blood clots in his right arm, suddenly this nationally televised game might not be so important for Los Angeles after all.

Either way, look for NBA Saturday night primetime on ABC to still be 'must see TV' between these two historic-rivals.

Will the Celtics Beat L.A.?

Well if Irving's after practice one-on-one's against teammates Jayson Tatum and Jaylen are any clear indications that 'Uncle Drew' is ready to put on a shooting clinic, it might be long night for Jack Nicholson and Lakers' fans at the Staples Center.