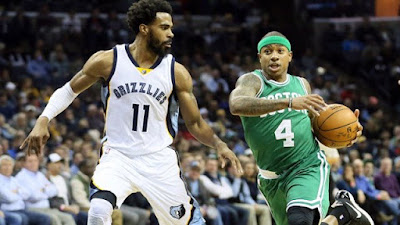 No Celtic other than Isaiah Thomas had at least eight points at halftime as Boston dug themselves into a 17-point hole in the third quarter.

It was Thomas who got the rally going, pouring in 36-second half points that held off the Memphis Grizzlies in a 112-109 overtime victory at the FedEx Forum on Tuesday night.

Thomas scored a career-high 44 points, including going 7-of-10 from behind the arc (10-of-16 overall from the field), he also handed out 6 assists.

Marc Gasol led the way for Memphis as he scored 24 points, grabbed 7 rebounds and also finished with 6 assists. Troy Daniels would also score 24 points off the bench, while Mike Conley added 19 points and 8 assists in the Grizzlies' third straight loss.

It looked it was going to be a long night in Memphis as the Celtics were sluggish through the first 24 minutes of action. The Grizzlies held a comfortable 45-31 lead at intermission, and began to coast halfway through the third quarter.

Bradley and Thomas would take over the end of the third and throughout the fourth period.

It went down to the wire after the Celtics grabbed their first lead of the second half on a Bradley 3-ball (90-87) with just over three minutes left in regulation.

With the game tied at 97, both the Grizzlies and the Celtics had opportunities to grab a win. Gasol missed an 8-foot jumper with 2 seconds remaining, Horford with 0.9 seconds, failed to hit a layup on an inbound pass from Kelly Olynyk as time expired, sending the game into overtime.

Zach Randolph was called for a flagrant-2 foul and ejected after throwing his elbow into Olynyk's neck at the 2:43 mark in the extra frame.

Boston was down 106-105 with 1:10 left before they would go on and score the next five points. Isaiah Thomas hit his two final free-throws with 7.4 seconds left to secure the Celtics' first win over a .600 team this season.

After beating the NBA's best defensive ranked team in the Grizzlies, this was clearly the best win of the year so far as the C's now hold a 16-12 record.

Boston will look to wrap-up their three-game road trip on a positive note when they take on the Indiana Pacers (15-15) on Thursday night.

Isaiah Thomas' previous career-high in the regular season was 38-points on three separate occasions. Boston is now 1-0 in overtime wins this season.