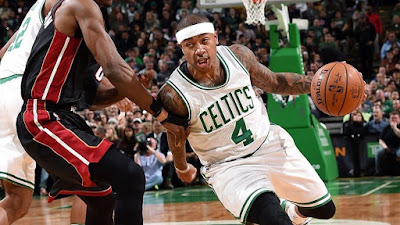 After a loss to the Cavaliers less than 24 hours before, it looked like the Celtics' hectic month of December had finally caught up to them and on a second night of a back-to-back and without Avery Bradley (illness) in the lineup.

Boston would put up a fight with its toughest soldier; Isaiah Thomas leading the charge in the fourth quarter.

Celtics went on to win the battle as they beat the Miami Heat 117-114 at the TD Garden on Friday night to close out their 2016 in style.

Thomas set a new career-high of 52 points, including going 9-of-13 from deep (15-for-26 overall from the field). With his mother watching from the stands, the All-Star guard scored a Celtics franchise record 29 points in the fourth quarter, breaking Larry Bird's record (set in 1983 then later tied by Todd Day in 1995) of 24 points in one quarter.

It was only 10 days ago that Thomas set a previous career best of 44 points in a comeback victory against the Memphis Grizzlies, now he finishes with the fourth-highest point total in Celtics history while Bird still holds the feat for the most points (60) set against the Atlanta Hawks back on March 12, 1985.

"It's remarkable," said Celtics coach Brad Stevens. "That was an unbelievably willful performance -- and we needed it."

As the Garden faithful cheered and chanted M-V-P each time Thomas mad a trip to the free-throw line down the stretch, the veteran guard also received a standing ovation as he was a perfect 13-for-13 from the charity stripe.

Meanwhile, Al Horford was the only other Celtic to score in double figures, he added 21 points, 6 rebounds and 4 assists for Boston, who are now 20-14 on the season.

Goran Dragic (back spasms) sat out for Miami but they still managed to have six players who finished scoring in double-digits. James Johnson led the way with 22 points, 6 assists while Tyler Johnson chipped in 19 points and 6 assists. Josh Richardson also added 19 points and 8 assists in the Heat's fourth straight loss to give them a 10-24 record.

Both teams were coming off losses the night before and it would come down to the wire before this game was officially decided.

Thomas scored the C's first 11 points in the final frame, hitting from behind the arc, driving the lane for layups and converting 3-point plays. The Heat would rally once more to tie it up at 104 a piece before Thomas hit the go-ahead basket with 1:57 left to cap off an historic night.

Al Horford and Jaylen Brown (6 points) were the only Boston players other than Thomas to score in the fourth period until Marcus Smart hit two free-throws to ice the game with six seconds left.


"I'm not sure there was much more we could do," said Miami coach Erik Spoelstra. "He's one of the very best fourth quarter players in this league for a reason. He doesn't shy from the shot in the moment now. Inside half court he feels like is within his rhythm."

Thomas becomes the first Celtic to reach 50 points in a regular season game since Paul Pierce scored 50 in a double overtime loss to the Cavaliers in February of 2006. Before Pierce, Bird was the last Celtic to score 50 in a regulation game at the old Boston Garden in November of 1989 against Atlanta.

Thomas, who was two-points shy of the NBA record for the most points in the fourth quarter (31, set by Wilt Chamberlain in 1962 against the Knicks), has now scored 20-plus points in 18 consecutive games, the league's current longest streak.

They will bring in the New Year with three days off before they host the Utah Jazz at the Garden on Tuesday night. Tip-off is at 7:30 PM.

Isaiah Thomas' teammates encouraged him to score as Jae Crowder (6), Jonas Jerebko (5), Amir Johnson (4), Al Horford (4), combined for 19 assists and the Celtics overall finished with a total of 28 dimes, while Thomas did not record a single assist. Marcus Smart started in place for the ill Bradley, the guard finished with six points, four rebounds and two assists in 34 minutes of action.