Aron Baynes upgraded to 'questionable' against the Rockets 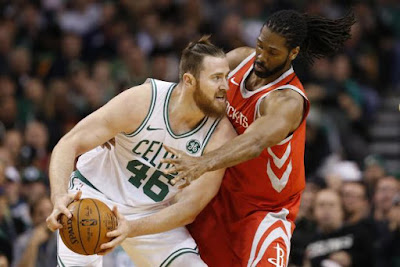 The Celtics have announced that center Aron Baynes' status has been upgraded to questionable ahead of Sunday's home game against the Houston Rockets.

Baynes has missed the last 11 games with a left foot contusion (bruised cuboid bone), which he injured back in January.


#NEBHInjuryReport for tomorrow vs. Houston:


The seven-year veteran has been a vital piece in anchoring the Celtics defense since he first arrived in the summer of 2017. Baynes has missed 29 games this season battling injuries such as a broken hand in mid December.

A return for Baynes into the lineup would be a lift for the Celtics, who are currently in fifth at 38-25, as they look to climb the Eastern Conference standings with 19 games remaining before the playoffs.

Baynes is averaging 5.7 points and 4.3 rebounds in 15 minutes per game this year, while shooting 46.6 percent from the field and 33.3 percent from beyond the arc.

The Celtics host the Rockets at the TD Garden on Sunday afternoon, which is set for a 3:30 tip-off on ABC.