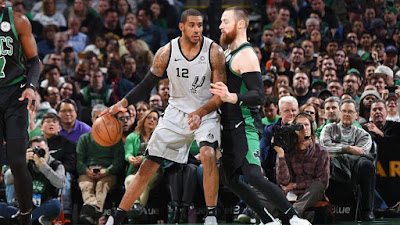 For the second time during this tumultuous 2018-19 campaign, the Celtics allowed an opposing player to score nearly 50 points, as they fell to the Spurs at home 115-96 for their fourth straight loss.

LaMarcus Aldridge took full advantage of a depleted Celtics frontcourt without Al Horford (knee) and a returning Aron Baynes (ankle) on a time restriction. The Spurs All-Star finished with 48 points on 21-of-31 shooting, 13 rebounds and 6 assists, while handing Boston it's worst defeat at home this season with nine games remaining before the playoffs begin.

Aldridge didn't have to worry about being doubled teamed, scoring 20 points in less than 10 minutes into the first quarter on his way to a game-high 25 points by halftime, as the Spurs led 54-47.

Marcus Smart led the Celtics with 14 points and Gordon Hayward, who returned from the NBA's concussion protocol after missing the last two games, recorded a double-double of 13 points and 10 rebounds, starting for the injured Jayson Tatum (lower back contusion). Marcus Morris also scored 13 points to go along with 6 rebounds.

Kyrie Irving left briefly in the first quarter to the locker room after what looked like a hand injury, only to return with tape on his left finger to play the rest of the way. The Celtics All-Star, who had finished with 30 or more points in each of his last five outings, went 5-of-17 from the field on Sunday night for 11 points and 12 assists.

It was another frustrating loss for the 43-31 Celtics, who blew an 18-point fourth quarter lead just 24 hours prior against the Hornets on the road, to trying to pull off a comeback from being down by as many as 25 to the Spurs.

The Celtics locker room was not open to the media for more than 30 minutes after the final buzzer sounded.


"Winning's hard. Team environments are hard," Irving said. "It's not as simple as listening to everybody else speak about what's going on with the team. ... Nobody's been in my position. Nobody here. So I don't expect anybody to understand that. Nobody can speak on it.

Brad Stevens also took a little longer than usual to speak with reporters, opting to have his player air out any input into their current four-game skid, which tied a season-high for the Celtics.


"There's some frustration in there," Stevens said of the team's discussion. "We don't need to ride the emotional rollercoaster. We need to get a lot better."

Boston never got into any kind of offense rhythm, shooting barely 40 percent from the field, including going 7-of-35 from behind the arc.

The Celtics are now two game back of the fourth place Indiana Pacers (45-29) and will look to gain some ground when they travel to Cleveland on Tuesday night to face the Cavaliers.

The Celtics finish their season 14-16 against the Western Conference, including going 0-12 and being swept by the Nuggets, Rockets, Trail Blazers, Jazz, Clippers and Spurs.