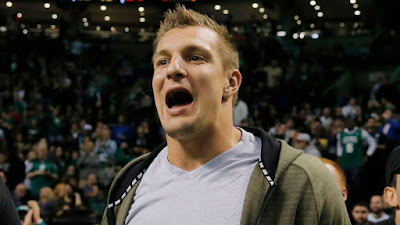 The news of New England Patriots tight-end Rob Gronkowski's retirement made its way into the Celtics locker room, following Sunday night's 115-96 blowout loss against the Spurs.

Celtics forward Gordon Hayward caught wind of the news when he was asked about it towards the end of his post game scrum.


"I didn't know that," Hayward said. "That sucks, he's an unbelievable tight end. Got a chance to meet him last year when I was hurt. (He was) really nice to me when I was over there at the facility and everyone was extremely nice. You don't have to do that -- to go out of your way and have a conversation with me, and stuff like that. Appreciate that from him for sure.

"Only been in Boston for a couple of years but I know he's done a lot for this city. I've seen him terrorize the Colts a little bit. He'll for sure be missed, and sorry to hear that."

Coming off a disappointing performance in a 19-point loss, Kyrie Irving's somber demeanor quickly changed when a reaction to Gronk's retirement was the first question thrown at him. The Celtics All-Star point guard expressed his appreciation for the champion retiree, whose body went through a lot throughout his nine-year career.


"I think he means a lot, just to the NFL and professional athletics," Irving said. "He's been able to accomplish, he's an incredible person, an incredible athlete. I'm super happy for him that he could retire on his own terms. I know he's been contemplating it for the last few years, I don't blame him. He was chasing rings, so I can appreciate a guy for doing that and playing at a high level.

"(He's) a guy that went through double coverage and triple coverage and still found a way to be successful in this league, it's pretty awesome, with the help of a very GOAT-ish quarterback. Just happy for him."