Celtics to battle with Pacers, prep for playoffs 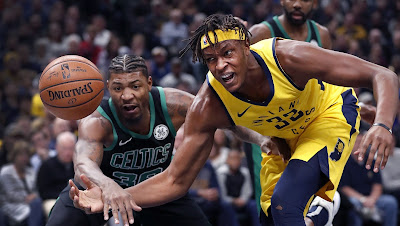 On Tuesday night, the Celtics officially clinched a postseason berth for the fifth straight year under Brad Stevens. Their win over the Cleveland Cavaliers, combined with the Detroit Pistons loss against the Denver Nuggets, will make it Boston's 11th playoff appearance in 12 seasons.

The Celtics will look to add to the franchise's record and extend their lead with the most championships in the NBA, which is currently at 17, when the playoffs begin next month. The last time the Celtics hoisted the Larry O'Brien trophy was in June of 2008, while their last trip to the NBA Finals berth was in 2010, where they went toe-to-toe with the Lakers respectively.

Besides rookies Brad Wanamaker and Robert Williams III, who will be tasting their first experience of the NBA playoffs, the Celtics will also be led by Kyrie Irving and veteran Gordon Hayward, along with second year forward Daniel Theis who all missed last season's deep run to Game 7 of the Eastern Conference Finals, due to injury.

Barring any significant aliments to Irving or Hayward in the next few weeks, both will be making their playoff debuts with the Celtics, as neither has played in the postseason since 2017. Ironically both were eliminated by the Golden State Warriors, Irving during the Finals in five games with the Cavs and Hayward in a four-game sweep with the Utah Jazz during the second round.

The Celtics (44-31) will battle with the Pacers (45-30) both on the court and in the standings, as they fight for the fourth seed in the East. With Indiana's loss to the Oklahoma City Thunder on Wednesday night, Boston is one game behind the Pacers for home-court advantage in the first round.

With seven games left for the Celtics, they will host the new look Pacers on Friday night for the first time since All-Star Victor Oladipo went down with a season-ending injury in February, then they head to Indiana a week later for their season series finale.

The importance of both games has grown over the last few weeks, as the Celtics are 9-11 over the last 20 games, while the Pacers are 3-7 in their last 10 outings.


"You gotta take it like the playoffs have started for us. They’re a playoff team and a possible team we might play," said Marcus Smart, who wasn't in the starting lineup yet the first time the Celtics played the Pacers. "For us to come out and really build some momentum against them before the playoffs start--who knows if we may match up with them--but if we do, we’re ready and we’ve built up that momentum against them."

In January the Celtics beat the Pacers at TD Garden by 27 points in one of their better wins of the season, after losing by one in Indiana on an Oladipo game winner two months prior.

With the regular season series tied at a game a-piece and the absence of Oladipo, the Pacers have since added veteran scorer Wesley Matthews and are relying on the inside presence of Thaddeus Young, Domantas Sabonis and Myles Turner, becoming one of the better defensive teams in the league and one of the toughest to the guard in the paint.


"They play in the seams. They play through their bigs. They make the right reads, the extra pass. They're flying off dribble hand offs and coming off pick and rolls and just making reads," said Indiana native Hayward. "That part doesn't change. And also, they're really physical. They play hard. They really play hard."

Brad Stevens' roster is relatively healthy, especially those who make defense a priority such as Al Horford, Aron Baynes and Marcus Smart. But there is one guy that Stevens feels doesn't get enough credit when it comes to his improvements on the defensive end of the floor throughout the season and thats Gordon Hayward.


"I think where you see the greatest signal of growth for him in the past six months has been on the defensive end," said Stevens after practice on Wednesday. "He's way more comfortable moving laterally and guarding. You can put him on a number of different guys. He's done a good job on that end."

Whether the Celtics grab the fourth seed or remain where they are in fifth, they're very likely to face the Pacers in the first round of the playoffs, unless they make up three and half games to catch the third place Philadelphia 76ers (47-27) with seven left to play (hey, it could happen). Either way, Stevens is only worried about closing out the regular season on a positive note.


"I'm pretty locked in on us right now. Certainly, we can prepare and we scout, and we’ll be ready for each of those games. We’re very cognizant of the fact of where the standings are and the likelihood of that playing out," Stevens said. "You're looking at it with a great amount of interest and maybe even an enhanced level of detail, but ultimately, we can't miss the boat on focusing on us. We have enough to worry about ourselves."

The Celtics will continue to prep for the playoffs, as they look to also climb the standings when they face the Pacers tomorrow night at the Garden in a 7 PM ET tip-off.