Report: Greg Monroe to sign a 10-day contract with Celtics 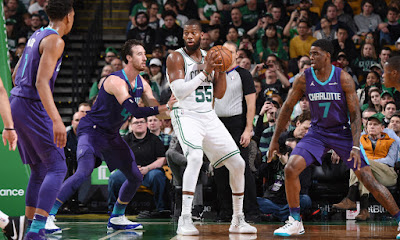 According to The Athletic's Shams Charania, the Celtics are signing center Greg Monroe to a 10-day contract.

The former Celtic big man signed with the Toronto Raptors in the offseason, playing 38 games while averaging 4.8 points and 4.1 rebounds in 11 minutes of action, before being traded to the Brooklyn Nets and later waived.


Monroe, 28, provided some much needed relief for a short-handed Celtics frontcourt last season. In 26 games he averaged 10.2 points, 6.3 rebounds and 2.3 assists, while playing 19 minutes per night.

With Al Horford (rest) and Aron Baynes (ankle) to sit out against the Charlotte Hornets, it gives Monroe a chance to grab some minutes, while splitting rotation time with Daniel Theis and possibly rookie Robert Williams III.

Aron Baynes is now listed as 'day-to-day' following an MRI on his ankle that is said to not be as severe as initially reported. During the Celtics loss to the Sixers on Wednesday, the team called Baynes' injury a grade-2 ankle sprain, that usually takes about a month to heal and rehab.

Brad Stevens told reporters on Friday that Baynes could return as soon as Sunday when the Celtics host the San Antonio Spurs.

Baynes has missed 29-games this season with an assortment of injuries and the Celtics are 16-13 when he's not in the lineup.

The 6'10, 240-pound Thomas Robinson was claimed off of waivers by the Celtics' G-League affiliate the Maine Red Claws this week and could also be a candidate to fill Boston's 15th and final roster spot.

Robinson, who has not played in the NBA this season, averaged 22 points and 14 rebounds for the Beikong Fly Dragons of the Chinese league.


Per a source, the Celtics signing Greg Monroe does not mean the team will not sign Thomas Robinson. Boston wants to see Robinson play out the NBAGL season with Maine. In addition, the Celtics wanted someone ready to go right now with other bigs banged up.
— Keith Smith (@KeithSmithNBA) March 23, 2019


In three games for the Red Claws so far, Robinson is averaging 14 points and 14 rebounds.

Both Greg Monroe and Thomas Robinson are playoff eligible if the Celtics were to bring either player permanently for a postseason run.