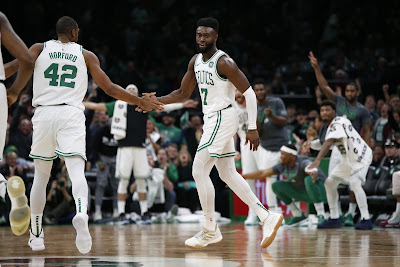 The 2018-19 season hasn't been easy for Celtics guard Jaylen Brown.

From losing his starting job to being the subject of public ridicule, Brown has endured a trying year. A lower back injury kept him out for three straight games back in November, and by the time he returned Brad Stevens had elected to go with a new starting lineup that featured Marcus Smart in the backcourt alongside Kyrie Irving, instead of Brown.

The Celtics had rattled off three wins in a row in Brown's absence, following a 10-10 start to the regular season. Boston was in the midst of its longest winning streak, at the time. Still, the third-year guard turned in his best performance of the season at the time.

His 21 points led the second unit in a 128-100 win over the Knicks, the Celtics' fourth consecutive victory. Boston eventually stretched its streak to eight straight -- which still remains as the longest Celtics winning streak of the year.

However, no other Celtics player has been berated and criticized during games more than Brown, who has been ridiculed on the court in front of cameras for all to see. Back in January, during a second-quarter timeout, Marcus Morris got in Brown's face for "not giving us his best," Morris said, and video captured Morris shoving his teammate before the two had to be separated.

Two weeks ago, Marcus Smart openly expressed his frustration with Brown immediately after Brown drove to the rim and drew an offensive foul in the second quarter of a 118-95 blowout loss against the Raptors, and dismissed an open Smart who was in the corner waiting for a pass that never came. Smart let Brown have it on the floor but later relayed to the media that "whatever it was, it's over now."

One of Brown's most interesting comments of the season came after a loss to the Nets earlier this year at the end of a three-game road trip where the Celtics finished 0-3. He expressed his displeasure with the blatant (and maybe not so blatant) blaming that had been going on within the team and pointed at the veterans -- mainly Kyrie Irving -- as the ones he thought should be leading by example instead of doing the blaming.

Felt like the message didn't fall on deaf ears, the Celtics were winners of 10 of their next 11 games following Brown's comments and he backed up his words by becoming one of Stevens' most reliable weapons off the bench. His play on both ends of the floor of late has not only led to efficient production while making an impact in slowing down opposing wings but it's also increased his playing time.

Brown's minutes have gone from 23.9 a night to 27 minutes a game in a secondary role that has led to his most impressive month of the season. He's averaging 14.3 points while shooting 46.6 percent from the floor, and was a thorn in the Kings' side Thursday night at TD Garden. Behind Kyrie Irving and Jayson Tatum, no other Celtics player has more 20-plus point performances than Brown, who has racked up 12, including his most recent back-to-back 22-point games against the Clippers and Kings.

After Boston found itself in a 17-point deficit, its second half play turned the game around and Brown was a big part of that. His 22 points led the second unit, drained 3-of-4 from behind the arc and finished with a game-high plus-19 game rating that made a big difference for Stevens and the Celtics.

His offensive approach of aggressively attacking the basket first, and settle for open jump shots later, has made all the difference lately. It's also contagious, as guys like Gordon Hayward and Jayson Tatum have followed suit in electing to attack, rather than settle for jump shots, more often compared to what we saw throughout the beginning of the season.

Kyrie Irving's triple-double (31 points, 12 assists, 10 rebounds) certainly headlined the box score but Brown's performance Thursday night was certainly the glue that kept the Celtics tuned in to erasing a double-digit deficit, pulling ahead by the beginning of the final frame and keeping the Kings at bay once building a significant lead -- 13-point advantage -- of its own.

While what Brown went through with his teammates throughout the season isn't the most traumatizing thing a player goes through in the NBA -- it's safe to say a lot of players go through something similar throughout the year that goes unnoticed or is kept behind closed doors -- it clearly hasn't faltered Brown's focus. The University of Cal, Berkeley product understands how important his play is for the Celtics' hopes of making a deep playoff run next month.


"I think he's done a good job of embracing that," Stevens said about Brown's secondary role off the bench. "He's done a good job of not letting that (coming off the bench) affect his aggressiveness or his game and the other thing is, when we bring him in and play him and take (Marcus) Smart out, he can guard the guy Smart's been guarding. And if we leave Smart in, we can move Smart to a ball-handler and pressure a little bit more like we did there in the fourth quarter. Those are good pairings and Jaylen's aggressiveness off the bench has been good ever since he's gotten used to it."

Defensively, there are very few who can succeed in one-on-one matchups for the Celtics and his offense has found its rhythm while Gordon Hayward is striving to find consistency in his. Stevens will lean heavily on Brown from here on out.

He's all of a sudden become the anchor of the Celtics' bench and has accepted his role as a vital piece to the second unit of a potential championship contending team.