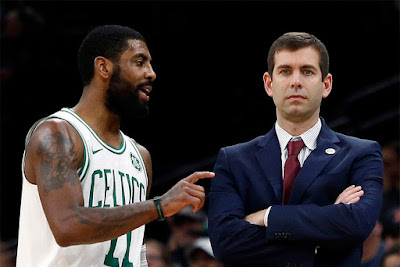 The 2018-19 regular season hasn't gone as planned. Following Sunday's loss against the Rockets, Stevens has had two lengthy conversations with Irving, one on the team plane ride to California Sunday evening and the second happened Monday, the Celtics head coach revealed Tuesday before shoot around.


"You could tell that was something that had really hit him in that moment," Stevens said about Sunday's loss to Houston. "There's a lot of year left and these will either be a part of the story that stays consistent and you'll be able to write the story now or these will be blips on the radar and you'll be like, 'Huh. Turned into something good.'"

Stevens is hopeful for the latter. There's still plenty of basketball left in the regular season, he explained to Celtics reporters Tuesday, speaking for a frustrated Irving who recently lashed out in his most recent rant about his distaste for the media and what comes along with being a prolific athlete -- what a player does on and off the court is constantly magnified.

Stevens understands a lot of the team's shortcomings come down on Irving, something he understands goes beyond basketball.


"Ultimately, I don't necessarily only spend time thinking about these guys as the basketball players with capes on," Stevens explained. "Spend a lot more time trying to put ourselves in other shoes and understanding all the things that they have to carry. I think Kyrie has obviously had an incredible year. He's a six-time All-Star, he was an All-Star again and he was a no-brainer. I also think he has shouldered a heavy, heavy load and there's a lot that comes with that. And there's a lot of stress that comes with that.

"And I think he would be the first to tell you that this year hasn't gone exactly how we hoped but this year is not over."

With 18 games left, starting with a four-game road trip, the Celtics will look to take down the champion Warriors at Oracle Arena -- it would be exactly the kind of win they need to spark a strong finish to a rather underwhelming season.


"Hopefully these things remind us how bad we need each other," Stevens said. "The reality is Kyrie was an All-Star but our strength was in our depth so Kyrie can do things that other guys can't do, those guys all bring certain strengths to the table but if we're not playing well, all nine of us, then we're not as good as we hoped to be."