Kyrie Irving determined to turn things around for the Celtics 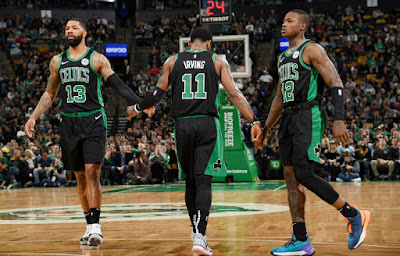 It's time to find out what Kyrie Irving is truly made of.

We've spent the past month listening to Irving tell us how he's ready for the postseason or as he put it -- that's when he has the most fun. Well with only eight games left in the midst of a four-game losing streak, the Celtics still have a shot at grabbing home court throughout the first round if they're able to top the Pacers in their final two meetings against Indiana -- the team that currently holds a two-game lead for fourth place in the east.

However, in terms of turning things around, all of the signs are against the Celtics. From the losses, embarrassing defensive lapses to Irving's body language and attitude, it's hard to see the light at the end of the tunnel.

After the Spurs whistled for a timeout with 2:36 left to play, the Celtics held their team huddle with all of their starters subbed out, while San Antonio held a 17-point lead, Irving was visibly disengaged. He sat by himself, two seats down from the huddle and eventually left the bench and headed to the locker room with 17 seconds left.

Still, Celtics head coach Brad Stevens says he believes in his All-Star point guard and sympathized with Irving over the pressure he faces as a leader.


"At the end of the day, he's got a lot of responsibility on his shoulders, he feels it and we believe in him," Stevens said. "There's days like that, there's nights like that. He played a lot of minutes last night. If we would have been better in the fourth quarter, maybe he wouldn't have had to play a lot of minutes last night. But we didn't do every little thing we needed to do and as a result, that all adds up, too."

Boston's latest defeat came in blowout form against LaMarcus Aldridge and the Spurs. Aldridge torched the Celtics as he flirted with a 50-point night (48 points) on 20-of-31 from the floor to go with his 13 rebounds and six assists in a 115-96 win over the Celtics.

With Al Horford (rest) and Robert Williams (back) both out, and Aron Baynes (lower back) on a 15-20 minute-restriction, the Celtics were extra thin up front as they tried to contain Aldridge throughout his big night. Still, Irving is still confident good times are coming following a team discussion -- which delayed Stevens' press conference and left reporters waiting for over a half hour for the Celtics head coach to make it to the podium.


"Winning's hard, team environments are hard," Irving said. "It's not as simple as just listening to everybody else speak about what's going on with our team, it's hard being a professional athlete. Being in a team environment and wanting to accomplish something very great. Everyone always wants to say, 'Oh you need to do this, you need to do that.' Nobody (expletive) knows. Nobody's been in my position. Nobody here. I don't expect anyone here to understand that. Everybody can just speak on it and give their opinion about what would be best for it.

Irving has been on that stage before. As a point guard with a championship pedigree, he believes in his teammates and says there are players in the locker room that are committed to winning but that it starts with him, while the Celtics are still trying to figure things out, even this late in the season.


"We're trying to build great championship habits and that takes time, and it takes a commitment," Irving explained. "But like I said, it starts with me, and I'll do my best to keep communicating as best I can and get the best out of these guys because they deserve it from me."

After five straight, Irving snapped his streak of consecutive 30-point games Sunday night. He finished with 11 points on 5-of-17 from the floor but throughout his string of 30-point games, the Celtics had only one win to show for it.

In what was refused to be described as a team meeting, Stevens spent time with his players immediately after losing to the Spurs. From that discussion, Irving talked about being a better listener for his teammates and they gear up for a playoff run that's less than three weeks away.


"I'm used to gearing up for something bigger than myself around this time, and what it takes and I have to do a better job of communicating that to my teammates, and being a better listener and kind of figuring out how to best communicate with those guys," Irving said. "At this point of the season, I'm on the VersaClimber, I'm on the treadmill, I'm getting ready to play 40-plus minutes and get ready for wars and battles. At the end of the season, it's just practice time.