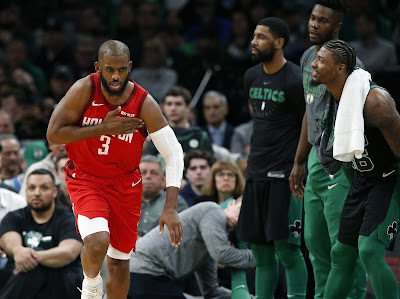 It's time for Brad Stevens to finally make a change.

After dropping five of their last six games, the Celtics need a shakeup. Whether that means a change to the starting lineup or player rotation, Stevens needs to find a way to maximize talent in order for Boston to gain momentum before the start of the postseason.

It starts and ends on the defensive end of the floor. The Celtics have been giving up a lot of points throughout their recent six-game stretch and while defense continues to be the backbone of Stevens' system, he should be giving minutes to players who show effort in creating defensive stops.

We didn't see much of a defensive effort through the first three quarters against the Rockets Sunday at TD Garden. Boston allowed 100 points through three quarters and watched Houston light it up from behind the arc. James Harden and Eric Gordon did most of the damage.

They nearly outscored the entire Celtics team in the first half when they matched Boston's first-half point total (43) on their way to a 115-104 win. Harden (42) and Gordon (32) combined for 74 points, including 14-of-30 from deep, while Chris Paul added 15 to go along with his 12 assists.

Kyrie Irving led the Celtics with 24 points, 9 rebounds, 6 assists and Al Horford chipped in 19 points and 6 rebounds. Marcus Smart contributed 18 points and 6 assists on the afternoon.

Boston has allowed 112.6 points per game throughout its last five contests. Still, Stevens doesn't agree with the idea of changing his starting lineup.


"If I thought who we start the game with would make a huge difference or even give us the spark we need, we would try it or even just try it for the hell of it," Stevens explained. "I usually don't fly by the seat of my pants like that. I try to have a thoughtful process but we'll just keep plugging away and see what we do."

Stevens makes a good point. Changing the starting lineup may not be the solution, at the end of the day it does boil down to his players performing at a higher level, however, it's still up to Stevens to make the appropriate lineup change when his team needs to come up with stops. The second and third quarters have been the frames when the Celtics start to let up and find themselves in a double-digit deficit.

Adding Jaylen Brown to the starting lineup isn't exactly going to rectify the problem. However, going deeper into his bench could be the move that triggers the rest of his second unit to wake up.

Aside from Brown's 15 points in 28 minutes, the bench struggled throughout the first three quarters. They helped cut a 28-point deficit down to eight in the final frame but it didn't excuse them, or the starters, for giving up 100 points in 36 minutes.

Stevens has stuck with his same rotation -- one that ends with Daniel Theis -- throughout the past five games but now that Aron Baynes is back, he should consider sitting his backup big man and plugging in Semi Ojeleye. As one of the best defenders on the team, Ojeleye has taken a backseat to the Celtics' secondary scorers like Jaylen Brown and Gordon Hayward.

Ojeleye is a 3-and-D guy, who can close out on the perimeter -- where the Celtics were crushed against the Rockets. Houston drained a whopping 21 treys and it doesn't get any easier with the Warriors next up on the schedule.

Stevens says he'll explore all of his options ahead of facing the NBA champion Warriors, the beginning of a four-game road trip in California.


"We are still evaluating tweaks regardless," Stevens stressed after Sunday's loss. "So we just have to keep working to all play better, rather than when we play. And we've all had moments throughout the course of the year when we've played well. Danny (Ainge) has said this on a number of occasions, 'When we have six or seven guys playing well, we're pretty good,' and we've just got to get back to that."

The Celtics, at 38-26 are two and half games behind the Sixers (40-23) for the fourth best record in the East, before they play against Golden State on Tuesday night at Oracle Arena.

Celtics shot 48 percent from the field, but they went 8-of-28 from behind the arc, while Houston (47.5 percent) hit 21-of-51 3-pointers. Both teams finished with 50 rebounds a piece. Aron Baynes (foot) made his return to the Boston lineup and in 12 minutes scored 4 points and grabbed 4 rebounds.