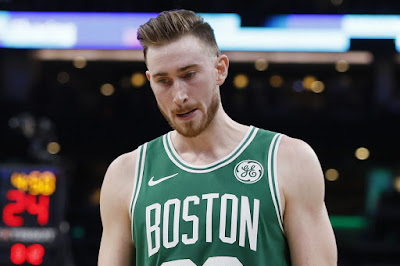 Celtics forward Gordon Hayward could miss a significant amount of games as he enters the NBA concussion protocol.

Hayward, who suffered from a strained neck in the first half of Saturday's 129-120 win over Atlanta when he took a tough screen by Hawks' big man John Collins and never returned, is considered doubtful for Monday's game against the Nuggets. Brad Stevens will continue to lean on Jaylen Brown, who's finished with 20-plus points in each of his last three straight games, for scoring production off the bench.

Terry Rozier (illness), who's been out the last couple of games, is expected to return Monday when the Celtics face the Nuggets. While Hayward's status of not being completely ruled out is encouraging, it's difficult to predict how long he will be in the NBA concussion protocol.

Hayward cannot return until the league approves his concussion testing. In the meantime, the Celtics will look grab their sixth win in seven games.