Semi Ojeleye tears into teammates during loss to Rockets 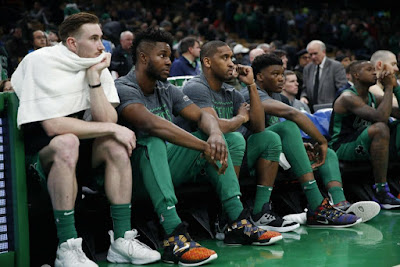 The Celtics fell into a 28-point hole against the Rockets on Sunday afternoon, on their way to a 115-104 loss at TD Garden. Second year forward Semi Ojeleye had seen enough as he tore into his teammates during a timeout to begin the second half.

It was a rare moment from one of the more quiet players on this current Celtics roster, as the third quarter commenced with back-to-back three-pointers by Houston's Eric Gordon.


"Wake​ the​​ fuck up," Ojeleye shouted to his teammates during a Brad Stevens timeout.

"I don’t normally do that, but I felt like we were kind of splitting apart," Ojeleye said after the game, to Celtics beat writer Jay King. "And I think we have to try to change it. I mean, the season’s wasting away. In the NBA teams are only together for so long. So it’s time to change it." [The Athletic]

While the Celtics were busy bickering and blaming each other, Ojeleye ultimately wanted his teammates to have a better showing of effort during the middle of what was quickly turning into a blowout.


"Making or missing shots isn’t going to determine our wins or losses," Ojeleye said. "It’s really about effort right now. And I was just trying to tell guys to wake up. The look on everybody’s faces was like we already lost the game, and it was the start of the third quarter.

"It’s been tough (for the Celtics lately) because the reason you play basketball is to be a part of a group, a second family, a group of brothers. I think right now we’re struggling to find that in each other. And I think when we do — because we’re definitely capable of it, we’ve shown it at times — I think everything will come together."

Following Ojeleye's words of encourage to his teammates, which had somewhat of an effect, as the Celtics nearly pulled off an improbable rally the rest of the way, cutting their deficit to eight points in the final frame.

Now, it's sill remains to be seen if Ojeleye's uncharacteristic outburst will resonate with the Celtics on their four-game California road trip. Sunday was just another example of how this season has gone for a Boston team that had high expectation of coming out of the Eastern Conference.