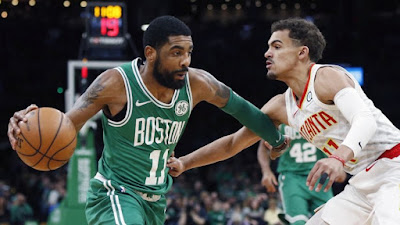 Kyrie Irving was one assist shy of a second straight triple-double, as the Celtics fended off a late Hawks charge in the fourth quarter to win 129-120 at TD Garden.

Irving finished with 30 points for a second consecutive game, to go along with 11 rebounds and 9 assists. The Celtics All-Star also held his own on the defensive end, adding two blocked shots --including one to seal the win -- and a steal.


"We got to have a sense of maturity," said Irving afterwards. "Their young guys out there started picking up the pressure and started being tougher. The Hawks have been playing well and to be mature about having a lead you got to keep the pressure on them, but you also got to play smart basketball on both ends of the floor...we didn't do that and it showed. So we just learn from it and go from there."

Jaylen Brown, continued his offensive tear, especially from the three-point line, as he scored 23 points off the bench. Marcus Morris notched back-to-back double-doubles with 19 points and 11 rebonds, while Marcus Smart added 16 points, 9 assists and 5 steals for the Celtics, who have won five of their last six games.

Gordon Hayward left the game with 3:50 left in the first quarter and did not return after suffering a strained neck when he ran into Collins' shoulder on a screen.

The Celtics led pretty much the entire afternoon, shooting nearly 70 percent from the floor in the first half and matched their season-high of 74 points by intermission.

Boston pushed their lead to 25 points before the Hawks cut the deficit midway through the third period, outscoring Boston 28-6 in a seven minute stretch.

The closest Atlanta would get was five with 36.5 seconds remaining and the Celtics hit their free throws to ice it the rest of the way.


"I feel like we let our foot off the gas there, kind of let them back in the game and then we had to fight," said Al Horford. "We need to figure that out, because Monday we have a tough one.

The 43-27 Celtics will have a day off before they host old friend Isaiah Thomas and the Denver Nuggets on Monday night at the Garden.

Celtics were aggressive in the paint getting to the free-throw line 37 times and turned 10 steals into 22 fast break points. Boston also finished with 30 assists on 44 made baskets.