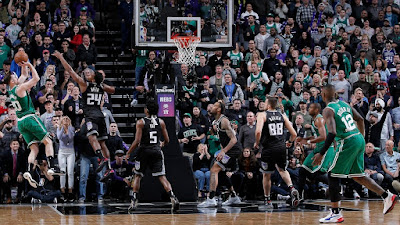 SACRAMENTO -- It was another big moment for Gordon Hayward and two consecutive wins for the Celtics, on a second night of a back-to-back.

This time, it wasn't a 30-point output for the veteran wing but rather a game-winner to beat the Kings 111-109 in Sacramento. Boston had to fight for this one, as the scrappy underdog Kings never let up and were on the verge of forcing overtime.

After Buddy Hield (23 points, 8 rebounds) was fouled from behind the arc by Hayward, he drained all three free-throws to tie things up at 109 with 7.6 seconds left to play. It was plenty of time for Hayward to make up for the shooting foul on Hield as he took the ball down the court and drained a sideline jumper seconds before the game clock expired.

With only two ticks left, Harrison Barnes (24 points, 8 rebounds) shot a deep 3-pointer that clanked of the back of the rim and sealed the Celtics' second consecutive win.


"Had to get it up the length of the court, I was able to finish the play off," Hayward explained when asked about his game-winning shot. "But (it) was really just making a play.

"Everyone was kind of tight on their man there so it was sort of just like 1-on-1 and the lane kind of cleared out and I was able to make the move going left. I really just took what the defense gave me. If somebody would have came and helped, I would have kicked it to them."

The game plan beforehand was simple: give the ball to two particular Celtics players and give either of them an opportunity to win the game.


"We were just going to give Terry (Rozier) or Gordon (Hayward) a run at it -- length of the floor, they're both good going the length of the floor," Brad Stevens said. "Gordon made a nice play, obviously. He got to his left hand, hit the little fade-away he's been hitting that particular regularly on a night where he didn't shoot great. That was obviously a big, huge shot for us."

It certainly was for Boston that needed to dig deep for a win against a Kings team that wouldn't give up. Jayson Tatum's 24 points (8-of-17 shooting) went a long way, while Al Horford's 11th double-double of the season of 21 points, 11 rebounds and 7 assists stuffed the stat sheet and late-game execution sealed a Celtics win.

Sure, it was Hayward's shot that handed the Celtics a win but it was Tatum who set the table beforehand. Tatum drained a huge field goal down the stretch, got to the free-throw shortly afterwards and gave the Celtics enough cushion to remain above the fifth seed.

Boston is going to need more clutch plays like that -- without Kyrie Irving -- if they want to make a push to the NBA Finals. With an Eastern Conference Finals experience underneath his belt, Tatum, is much more comfortable in clutch situations that most would have anticipated.

Marcus Morris also snapped out of shooting slump, finishing with 19 points and Terry Rozier got the start for Irving (left thigh contusion) chipping in 16 points and 6 assists for the Celtics, who are now 40-26 on the season.


"It builds a little bit of confidence, try to keep the good terms, games rolling. Be more consistent," explained Hayward, who led the bench with 12 points and 5 assists. "I felt like tonight wasn't my best night, shooting-wide but I try to do some other things. They were a tough team and I think the fact that they push the ball so fast up the court, was even harder on us coming from back-to-back so I'm proud of us that we gutted it out."

The Celtics will look to keep their momentum going and sweep both the Lakers and Clippers when they head to Los Angeles.

For the second straight game the Celtics shot over 50 percent from the floor, while they finished with 26 assists on 40 made baskets. Boston is now 13-13 against Western Conference teams this season.