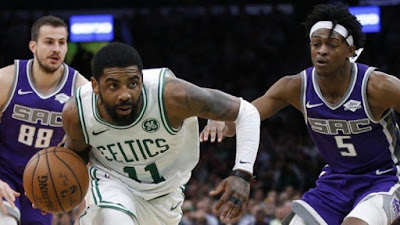 The Celtics were pushed to their limits by the run and gun Sacramento Kings for the second time in eight days. Kyrie Irving pulled out a triple-double from his bag of tricks on Thursday night in a 126-120 win at TD Garden.

Irving finished with 31 points to go along with 12 assists and 10 rebounds to help the Celtics erase two double-digit deficits. It was only the All-Star's second career triple-double, with his first being in Cleveland back during the 2013-14 campaign.

Jaylen Brown added 22 points off the bench, while Marcus Morris notched a double-double of his own with 21 points and 13 rebounds.

Jayson Tatum (sore shoulder) chipped in 15 points on 7-of-10 shooting from the field in his first game back since beating the Kings in Sacramento.

Boston has now won four of their last five and are a half game behind the 76ers for the fourth best record in the Eastern Conference at 42-27.


"It's going to be a dogfight, no matter who you are playing against," said Irving, who recored his first triple-double in five years. "Obviously, when you have a team fighting for playoff position, it is going to be that type of intensity and you have to be ready for it."

Buddy Hield led Sacramento with 34 points on 6-of-10 shooting from behind the arc and 7 assists. Harrison Barnes added 20 points and De'Aron Fox contributed with 19 points, 9 assists and 7 rebounds for the Kings, who haven't won in Boston since 2007.

The Celtics began the night in a 17-6 hole and were behind by as many as 17 points early, as Irving's 19 first half points cut into the King's lead 62-56 by intermission.

Boston used a 9-2 run to start the second half to take their first lead since the opening quarter, but Sacramento battled back to take a 89-79 lead with three minutes remaining in the period. A three by Irving, followed by back-to-back-to-back 3's by Jaylen Brown put the Celtics ahead 93-91 to end the third.

The Celtics never trailed in the final frame and pushed their lead to 13 at one point to hand the Kings their second loss in three tries, while on a four-game East coast road trip, as they continue the fight to clinch a possible playoff berth.


"The hardest game is the first game coming back from a road trip," said Irving afterwards. "So, they were up 17, but we used our experience and a lot of the things we’re great at, just attitude, toughness, things we can control, effort, and got back in the game."

Boston will have a day to rest before they host the Atlanta Hawks on Saturday afternoon. Tip-off is at 12:30 PM ET.

Both the Celtics and Kings were pretty evenly matched as each team shot 50.5 percent from the floor, while Boston finished with 32 assists and Sacramento with 31. Boston also outscored the visitors 64-60 in the paint and out-rebounded the Kings 59-53.

Kyrie Irving is the first Celtics player to record 30-plus points and a triple-double in the same game since Rajon Rondo back in 2012.