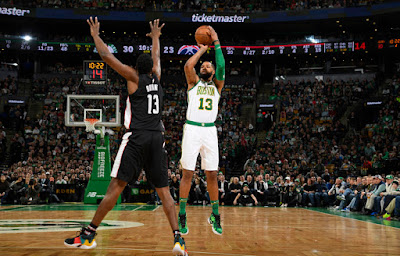 Celtics forward Marcus Morris has been one of the team's most important players this season.

His numbers certainly indicate that notion but one thing about Morris that you won't necessarily find in the box score is what he's meant to the 2018-19 Celtics from as leader.

The seven-year veteran's boisterous approach to the game can typically make all the difference on the court but off the court and in the locker room, Morris has a strong presence.

He holds himself, as well as his teammates, to a higher standard and has sometimes had trouble with keeping his feelings to himself. Following one of the toughest losses of the season, Morris talked about being unhappy and called his team out for not playing together or having each other's back when they blew a 20-point lead against the Clippers.

And after the Celtics dropped four straight after the All-Star break, Morris let everyone know via Twitter, just how confident he still is in his team.

We gonna get it together don’t sleep Boston! Bounce right back!
— Marcus Morris (@MookMorris2) March 1, 2019

For Morris, it's his duty to be a better leader by bringing more energy to the team or as he put it, "bring some soul back to this (expletive), man."

"When it rains it pours," Morris explained. "I've always been one of those guys that always stands above all that and continue to be professional and you know, when it's time to spark something and (expletive), that time is now.

Twenty games left, with me personally, build a lot of consistency, lot of confidence, and get that swag back that we had early on."

The Celtics showed plenty of swag against the Wizards Friday night at TD Garden. It was the kind of game where nearly every player finished with double figures in points, guys were hustling on the defensive end and it led to easy buckets and a double-digit, fourth-quarter lead.

Bradley Beal scored 27 of his game-high 29 points through three quarters for the Wizards, he also added 11 rebounds 6 assists and a pair of steals. Jeff Green and Tomas Satoransky each finished with 15 points.

With less than 20 games left in the season, Boston is searching for pivotal momentum before heading into the playoffs -- something that Morris reminded reporters about when he shared a conversation he had with second-year forward Jayson Tatum.

Throughout the four-game losing streak, Morris hadn't been shooting the ball well but found his touch against the Wizards, where he went 7-of-17, including three 3-pointers. There was certainly a spring in his step Friday night and it made a difference on and off the court for him and his teammates.

Celtics: Scored 50 of their 107 points in the paint and forced 18 turnovers.